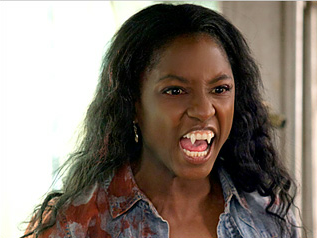 True Blood sure continued to bring the crazy this week! Here’s what’s going on with everyone:

Tara is still furious with Sookie and Lafayette for turning her. She resists the urge to snack on a blond girl she comes across in the woods, instead heading over to Sam’s bar, where she gorges on blood and tells him not to let anyone know that she’s there. Once she passes out (…from all the blood? Is she drunk? I was confused) he puts her in the freezer. There she stays, until Lafayette tries to get her something to eat, she breaks the door down, and blows up Sookie’s spot in front of Alcide. Alcide didn’t realize that his V-addict girlfriend Debbie was dead, nor that it was at Sookie’s hand, and once he learns all of that stuff he is understandably furious with her. Meanwhile, Lafayette is being possessed by some kind of blue rubber demon in the mirror and doing terrible things like pouring bottles of bleach in the gumbo at Merlotte’s. Luckily he snaps out of it before he can carry out his plan. No idea what’s going on there.

Jason runs into an old teacher of his, who just so happens to be ANNA DRAPER, and with whom he had an underage affair fifteen years before. He talks her into bed and just when she seems enthusiastically ready to rekindle their romance, he gets a (metaphorical/emotional) thundercloud over his head and bounces. He’s still feeling out of sorts when Jessica stops by, all riled up by the scent of a mysterious guy in a boutique in town, and Jason rebuffs her advances too. He’s realized, at the ripe old age of however old Jason Stackhouse is, that sex can no longer fill the void inside him. She agrees to just hang out and talk about his feeeelings, though we are mercifully spared that scene.

Eric and Bill are still sort of prisoners of the Authority, who want to make sure that the vampire race’s goal of assimilation isn’t compromised by these so-called “Sanguinistas,” who believe that humans “should be farmed.” They enlist Steve Newlin in this mission, as “the new Nan Flanagan,” whatever that means — it seems to be some kind of liaison position that the vampires can use to make their case for assimilation to the humans. Basically, he’s the new face of the Authority. In the meantime, Salome (yeah, the Salome from the Bible who asked for John the Baptist’s head on a platter, not any of the other Salomes that might come to mind) takes the opportunity to have sex with both Bill and Eric to make sure that they can be trusted, or something. They are both into it/not that perturbed to find that she paid them each a visit in the same day. Salome tells Christopher Meloni that she thinks they can be useful to the Authority in executing their goals, and then we see that they’re in some kind of relationship too. What an exhausting day for Salome.

Finally, Pam is worried that she still can’t reach Eric, and we see in flashback how he ended up turning her into a vampire. She wants an escape from her life as a turn-of-the-century madam (and who can blame her; the cold sores on those working girls were terrifying), and she’s sick of being terrorized by hungry vampires. Eric doesn’t want the responsibility of being her maker, though he is enjoying some kind of casual relationship with human Pam, but she slits her wrists in front of him and he no longer has any choice but to turn her. Also, Jessica’s ex Hoyt is now hanging out at Pam’s vampire/human meet market, which I think makes him a “fang banger”? ALSO, Pam’s bond with Tara enables her to sense when Tara decides to try and off herself in a tanning bed, the scene that closes out the episode. Pam’s super compassionate reaction to all of this? “You stupid bitch.” Uh, see you next week!