TRON: Legacy Toy Lightcycle, Aside From Looking SWEET, Can DRIVE UP WALLS! 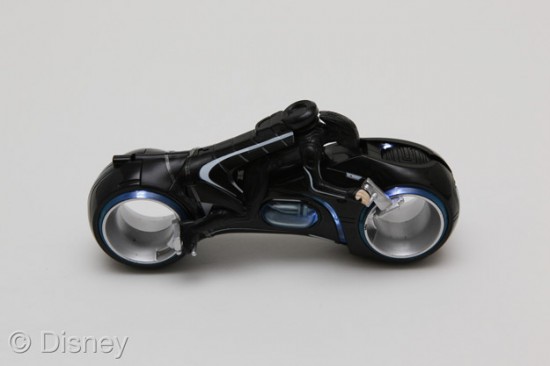 Disney revealed its toy line for the much anticipated TRON: Legacy at a press event yesterday. It pretty much confirms my extreme depression about the fact I’m no longer 8, recently brought on by the colossal nostalgiafest that was Toy Story 3. Why? BECAUSE TOYS ARE AWESOME — and specifically, these toys, which include sleekly designed action figures, vehicles, and electronic accessories.

But the biggest piece of news: According to Underwire, the remote-controlled light cycle will be able to SCALE WALLS! Kids these days, they don’t know just how lucky they are. Details, images, and a video after the jump.

Chris Heatherly, vice president of toys and electronics for Disney Consumer Products (sweet job title), said at the conference: “In the movie, the light cycles drive in 3-D on the walls, so we wanted to re-create that.”

The light cycle toy will utilize a new suction technology developed by company Air Hogs, which will reportedly allow the vehicle to (loudly) “[spin] around on the wall as easily as it does on the ground.” If its light trail is crossed by another light cycle, then it is deactivated and falls off the wall, just like in the movies!

And without further ado, here is our first peek at the TRON: Legacy toy line!

The press release reads: “Developed in collaboration with leading industry innovators including Spinmaster, Monster, Performance Designed Products (PDP) and Razer, TRON products will be available at retail beginning this October and will be showcased at the San Diego Comic Con International Convention next month giving fans an exclusive first look.”