Swedish Man Survived Being Trapped in Car For Months, Hibernated “Like a Bear” 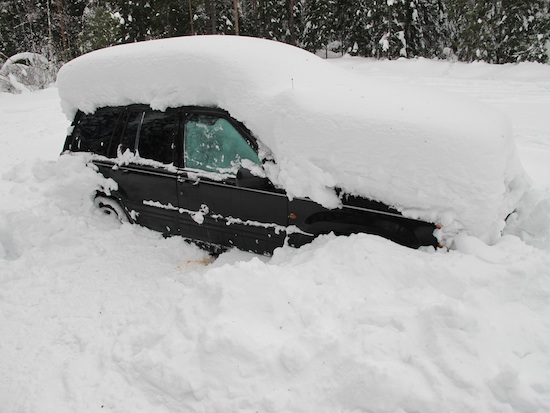 There’s a pretty incredible story floating around the Internet today about a 45 year-old Swedish man who was rescued from his car after apparently being trapped inside without food for months. Some snowmobilers came across the vehicle buried in snow on a forest path, not far from the northern city of Umea. His rescuers were surprised to find someone inside, wrapped in a sleeping bag, and even more surprised when the man managed to gasp out that he’d been in the car since December 19th.

That someone could survive for so long and in such harsh conditions seems impossible. The going theory is that the man was able to stay hydrated by eating the snow he could reach from his window. As far as his need for food goes, it seems that he used little energy and lived off his body’s fat reserves. Vasterbottens-Kuriren, a local news outlet, quotes physician Stefan Branth via Reuters as saying:

“A bit like a bear that hibernates. Humans can do that,” he said. “He probably had a body temperature of around 31 degrees (Celsius) which the body adjusted to. Due to the low temperature, not much energy was used up.”

Now, it’s important to note that while the man survived, he didn’t hop out of the car in the picture of health. News reports say that he was barely able to move or speak upon his rescue. His poor state of health does lend some credence to his story, though it might just as easily mean that he was confused when saying how long he’d been snowed in for.

As to the status of his recovery, Reuters reports that the hospital caring for the man says he’s “doing well considering the circumstances.” If he’s really lived off snow for two months, that doesn’t sound all that good.