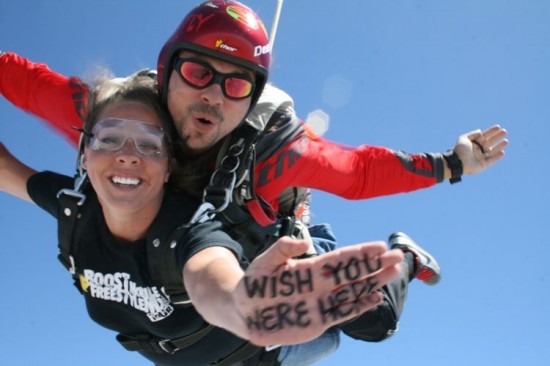 Its seems that the FAA recently investigated what is probably the most, um, interesting possible violation they’ve ever witnessed. Alex Torres, a pornformer who also goes by the name of Voodoo, released a video of himself skydiving while having sex with Hope Howell, a receptionist at the Skydive Taft where he worked as a skydiving instructor. They met up with a pilot to film the video early in the morning, when no one would see the event going down live.

The video, reportedly, shows the couple starting the, uh, “process” in the jump seat on the plane, right next to the remarkably professional and undistracted pilot. Then, of course, the video shows the two jumping in tandem and continuing the act in mid-air. Torres originally posted the video on his blog, but ultimately took it down when the investigation started.

The video apparently started making the rounds at a local highschool, at which point the local police approached Dave Chrouch, the owner of Skydive Taft. Lucky for Torres, the plan to film early in the morning paid off. No criminal charges are pending considering that no one was around to actually complain about seeing the act being performed live, therefore, no public indency issues. Torres still managed to lose his job (big surprise) and Howell’s fate is uncertain.

Of course, the local police weren’t the only ones interested. The FAA presumably took a look at the video and issued a statement saying that there are no explicit rules regarding sex in a private aircraft. However, a pilot who allows any activity that could “physically jostle” him or cause him to lose control of the aircraft could be in violation of federal aviation regulations. Dave Chrouch asserts that the pilot seemed to be in control the entire time, and he didn’t lose control of the plane, so I’d believe it. The stunt was apparently devised as a way to get the attention of Howard Stern, and considering that story has been picked up by many major media outlets, it probably worked.

Video contains blurred stills from the movie, so it’s technically safe for work I guess. You know where you work. You decide.

UPDATE: Here’s the NSFW link to the video.

(via Buzzfeed, image via SkydiveTaft)