Trump is having a very bad day. Good. 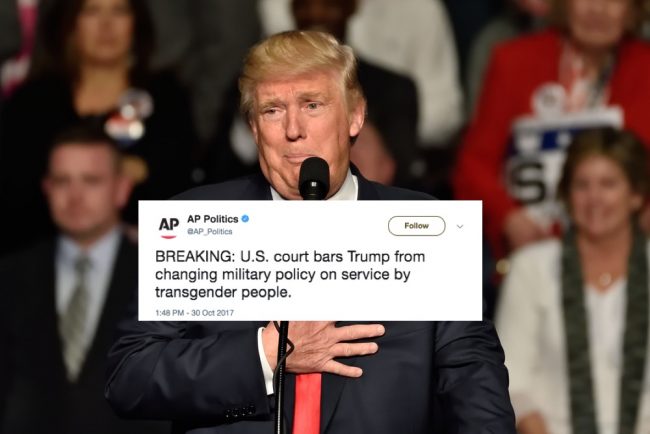 Multiple outlets are reporting that a federal judge has blocked enforcement of Trump’s terrible out-of-left-field ban on transgender people serving in the military, but the fight isn’t finished.

This story is still developing, so we’ll update here when we know more, but according to the Post:

… The court upheld part of the president’s directive blocking military personnel from having sex reassignment surgery.

The order in Washington by U.S. District Judge Colleen Kollar-Kotelly temporarily prevents to the Pentagon from enacting the ban that Trump announced by tweet in July.

The court found that the ban likely means the plaintiffs — transgender troops some with decades or meritorious service – had their rights to due process violated.

It looks as though, while the court is arguing that transgender service members cannot be removed from their posts or prevented from signing up, matters might be more complicated when it comes to their health care needs. The decision, Doe v. Trump, notes on the matter of sex reassignment surgeries:

Plaintiffs have also challenged the Presidential Memorandum’s prohibition against the expenditure of military resources on sex reassignment surgeries. Because no Plaintiff has established a likelihood of being impacted by that prohibition, the Court lacks jurisdiction to adjudicate the propriety of this directive.

It should be noted that, back when Trump impulsively Tweeted out his awful transgender ban—surprising everyone around him, and especially the Department of Defense—all ultra-conservatives had sought from the President was a ban on sex reassignment surgery and hormone therapies being covered by the military. Even the most conservative politician had not sought an outright ban on transgender people serving—only Trump decided to go that far, to deflect from his own scandals, and just because he could.

While this court block feels like a victory, this matter is likely far from over—and it’s horrific to think that transgender service members could be denied some health care coverage, when their needs amount to “an exceedingly small portion of active-component health care expenditures,” according to a 2016 study commissioned by the Department of Defense.

The study concluded that these increases would only represent between 0.005 to 0.017 percent of overall Department of Defense health care expenditures, which totaled $49.3 billion in 2014.

Trump has long attempted to justify his inexplicable ban by pushing a false narrative that transgender soldiers are costing the armed services a lot—when in actuality it’s about the cost, yearly, of one Trump golf weekend. This is nothing more than Trump playing politics with people’s lives and bodies simply to score political points with his Congressional supporters and his base. I hope Robert Mueller slowly tightens his grip around Trump until his head explodes.