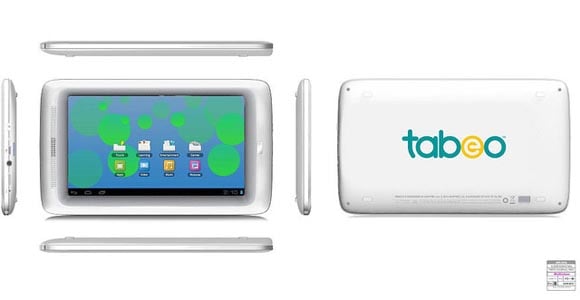 We know Toys ‘R’ Us does toys – heck, it’s right there in the name – but today they’re venturing into uncharted territory. The retail chain will soon be selling their very own tablet created especially for kids. So instead of breaking your expensive technological device, they can break their own!

In all honesty, it’s probably a genius idea. Parents love buying their offspring the children’s version of adult products.

The Wall Street Journal writes, “The $149.99 Tabeo will be available only at Toys “R” Us, so shoppers won’t be able to try it out in a store and then purchase it for less on a rival retailer’s website. The tablet goes on sale Oct. 21, and pre-orders are now available online at Toysrus.com.”

But besides items like the iPad, the Tabeo isn’t the only kid-friendly tablet on the market.

“The retailer priced its tablet significantly lower than the three similar child-oriented, Wi-Fi-equipped tablets already on the chain’s shelves,” writes WSJ, “but the makers of the Kurio 7, Meep and Lexibook quickly matched its $149.99 price tag, even though the Tabeo won’t be available until late October.”

“Toys ‘R’ Us is in a really hard place,” said M. Eric Johnson, associate dean of the Tuck School of Business at Dartmouth College. “The toy business is becoming a tougher game, and the Web is slowly killing off the big-box phenomenon.”

So what does the Tabeo offer?

“The Toys “R” Us tablet, which uses Google Inc.’s Android mobile operating system, more closely resembles an adult tablet; it comes loaded with 50 free game applications, including popular titles such as ‘Angry Birds,’ and the retailer has developed its own app store with 7,000 titles,” writes WSJ. “Focus groups of parents and children prompted the company to include features that allow parents to control what websites their children visit and how much time they spend playing with the tablet.”

Here are the features via the Toys ‘R’ Us website:

The Tabeo hits Toys R Us stores and online October 21. Would you buy one?