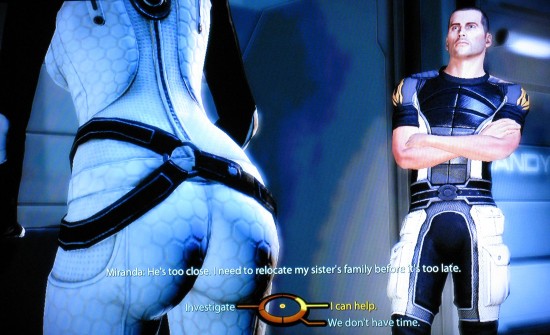 The problem with choices in games is that they’re mostly one of two things, neither of which actually counts as choices. They’re either an illusion of choice where the outcome is the same or they’re simply a question of which mechanic is better. If one option is quantifiably better within the game, it’s the obvious answer and therefore there’s little reason to pick the other. It’s rare to find a choice presented in video games that falls outside of this spectrum.

But those that do are the ones that stick with you. They are the ones—when seriously considered and chosen—that can tell you about yourself as a person. Of course, your mileage may vary, but there have been a nice handful of these kinds of choices over the past couple years.

There have also been some failed attempts at meaningful choices. Bethesda’s take on Fallout, and subsequently Obsidian Entertainment’s take, scratches the surface of meaningful choices, but never really moved me in any spectacular fashion. There was never that moment of introspection where I had to take a moment and really think about what I was doing, but they certainly came close a time or two.

Specifically, Obsidian manages to skirt closest to an introspective choice when you’re supposed to decide the fate of the Brotherhood of Steel. Depending on which faction you align yourself with, there’s little to do but destroy the chapter that Veronica once called home. It’s only through a small, small window of opportunity that you can save them by following the New California Republic’s quests and picking a number of specific options along the way.

It’s either that, or you have to do it on your own as an independent faction. So, the choice comes down to an entire sect of the Brotherhood of Steel, who have been as kind as any other faction, if not kinder, or dropping alliances—and failing the quests—with the two major factions. That would be a somewhat introspective choice, and in my playthrough it was the one I was required to make. But with the NCR route, the developers diluted it.

That’s just one choice in a large game, though. Luckily, other games have had multiple difficult choices in them. It should come as no surprise then that BioWare is currently heading the charge for meaningful choices. Between the Mass Effect and Dragon Age franchises, they’ve provided a relative wealth of meaningful choices in a time where they are otherwise lacking.

In Mass Effect, there are at least two worth mentioning. In the original, you’re required to decide the fate of the Rachni, an insect-like race of ravenous monsters that previously terrorized the known galaxy. However, they make the plea that they were being controlled and it was not of their own volition. Their wars and subsequent eradication was merely a product of their indoctrination.

It’s with this lack of critical information that you must make the call. Do you destroy a species that may have been an unwitting pawn in a greater plan, even though you’ve always been told that they’ve been responsible? Who do you believe? There is a mechanic backing this up at some point, so there’s certainly a point to the decision beyond introspection. But without that element, it becomes entirely a matter of how you feel about potentially destroying the last chance an innocent civilization has at redemption.

Similarly, in Mass Effect 2, Commander Shepard is called on to decide whether to reprogram a rogue faction of the geth. Given that we are led to believe that the geth are a sentient machine race, reprogramming them to have different beliefs—“for their own good” or not—is akin to brainwashing and subverts their free will. The other option, however, is simply genocide. Sometimes, lose-lose situations can be the most enlightening. It’s this kind of choice that can help you come to terms with your own actions in regards to and thoughts on free will.

At least now we have strong examples of the kind of meaningful, introspective choices that we want to see more of in video games. Some of these choices–and the events that surround them–strike their chords so well that it can often be surprising just how much they resonate. Where do you, as a person, draw the line on this or that difficult-to-answer question? Video games are the perfect medium for this experience. If designed correctly by the developers, you only have yourself to blame.