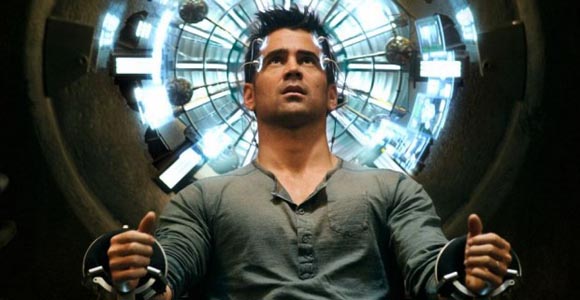 One thing on the minds of Total Recall fans when they first heard about the Len Wiseman reboot was, “Is there going to be a three-breasted woman?” I’ll admit, I was curious myself as to whether or not they would include that unusual detail from the original but we found out the answer was yes. Then the marketing geniuses behind the Colin Farrell-starring feature decided to bring her to Comic-Con International in San Diego and actress Kaitlyn Leeb got more than she bargained for. Fans thought her tripple-breasted prosthetic was real. Picture of Ms. Leeb after the jump.

Below is how Leeb was presented on the floor at Comic-Con and pretty much exactly how she’ll look in the film. Now, I can expect a certain amount of head tilting on this look, it is quite unique after all, but what I can’t understand are people seriously asking this woman if those breasts are real. But that’s exactly what happened.

“There were a bunch of people at Comic-Con asking if I had surgery for the third one,” said Leeb with a laugh while speaking to the Calgary Herald. “Others thought that the two on the side were real. I guess that’s the one thing that bothers me the most is that they think I’m out there prancing around Comic-Con with my breasts out. They really are not mine.”

Leeb must never have attended Comic-Con before because people with varying body parts hanging out is not an unusual sight but to actually believe this woman would have breast augmentation of this kind is just plain dumb. Yes, we know actresses are under pressure in Hollywood to get boob jobs, and while that’s awful enough, this is just absurd.

And just in case you were wondering – none of them are real. Leeb sat through four hours of prosthetic application to get three new breasts that weren’t hers. The appliance was created specifically for her during filming of Total Recall last year.

“They didn’t want to release too early that there would be a three-breasted woman from the original,” she Leeb. Actress Lycia Naff played the role in the 1990 original. “It was hush-hush. I had to fly to Los Angeles a couple of times last June and July to do the body cast to create the three breasts and my agent said ‘Don’t tell anyone!’”

According to Yahoo, Leeb has been trending in their searches since Comic-Con. They write, “Not surprisingly, 77 percent of her online interest has come from men. Perhaps an indication that some parents and wives need to do more policing, searches for the actress are coming from kids under 13 all the way to appreciative gents in their fifties.”

To be fair, Leeb never specified whether it was men or women directing the breast comments at her. All the ridiculous questions aside, the actress is certainly aware of what this role could do to her career. “I guess I have to be careful with the next roles that would come up,” she said. “You don’t want to get typecast.”