Because It’s Monday Morning, Here Is A Well-Dressed Monkey In A Canadian IKEA 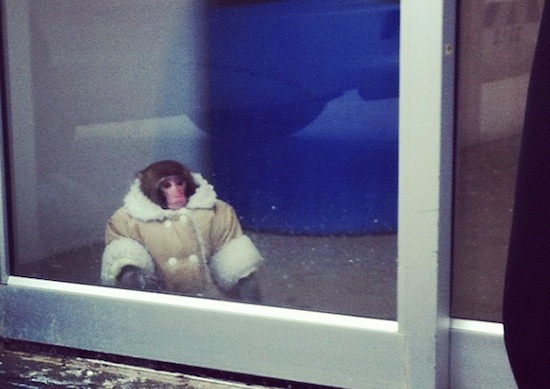 Look, we’ve all been there — you find yourself needing a new bookcase, so you decide to head to the local IKEA to purchase some new shelves, and maybe grab a couple of tasty meatballs while you’re at it. In the rush of excitement of shopping for new furniture, though, you accidentally leave your pet monkey behind. Happens to the best of us, right? OK, on second thought, maybe that’s not a series of events that you’re familiar with, but at least one Canadian shopper presumably is, judging by the rhesus macaque monkey found wandering a Toronto IKEA yesterday afternoon. Lest we neglect the most important part of this story, we now direct you attention to the monkey’s little coat, because OH MY GOD YOU GUYS LOOK AT HIS LITTLE COAT!!!

Umm saw a monkey in the #ikea parking lot. twitter.com/broniewyn/stat…

The sharply dressed macaque — whose coat is very seriously nicer than any piece of clothing I own — is safe and well following his big day out which found him spotted by shoppers yesterday afternoon at about 2 pm. Though the animal was a mostly tame pet — if the fitted shearling jacket didn’t tip you off, it was also wearing a diaper, thank God — it was having a rough go of it on its trip to the store. According to shopper Bronwyn Page, who tweeted the above photo of the misplaced monkey:

It was just running around screaming. There was a crowd of us around it and it seemed really scared and agitated.

In all fairness to the monkey, running around screaming while scared and agitated describes the demeanor of pretty much everyone you’re likely to meet at an IKEA at two in the afternoon on a Sunday, so at least the animal was in good company. Animal control personell wrangled the monkey after several IKEA employees shepherded it into a corner, an act which no doubt left some of them wondering whether they really wanted to be IKEA employees anymore.

Once the monkey was in custody and placated with some grapes, police contacted its owner in short order, which was apparently not too difficult, because, you know, it’s a monkey — though for our own edification, we do like to think that at least one person arrived to pick up their lost rhesus macaque only to declare “Oh, a shearling jacket? No, no, my monkey’s jacket is velour. Sorry to trouble you, officers.”

In a bittersweet end to the story, as owning a rhesus macaque is illegal in Toronto, the monkey will be taken from its unnamed owner, whose car it apparently escaped from in the IKEA parking garage. While the story will no doubt serve as a reminder for other exotic pet owners not to take their monkeys to town, we can only hope that this macaque will be allowed to keep its stylish wardrobe when it is transferred to an animal sanctuary in the coming days, because anything else just seems unfair.

(via Toronto Star, image courtesy of Lisa Lin via Instagram)