Eve Myles Thinks Torchwood Is “Inappropriate” For Doctor Who Crossover 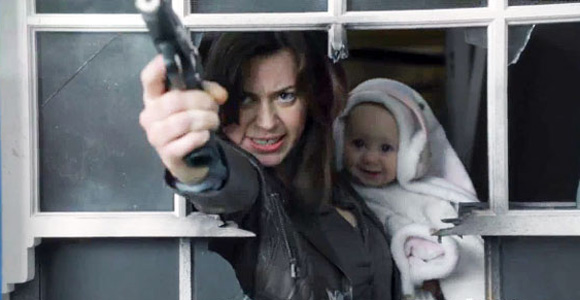 With the 50th anniversary of Doctor Who quickly approaching, fans are speculating what we might see in the forthcoming celebration. Presumably, figures from the Doctor’s past would emerge in some shape or form and you’d assume a few members of Torchwood would be included but according to star Eve Myles, the Doctor Who spinoff cast would not be involved because it’s “inappropriate.”

Myles spoke with the Independent at the recent MCM Expo in London and was asked if she thought Torchwood would play a part in the anniversary. “I wouldn’t have thought so,” she said. “We have lots of adult themes running in Torchwood and I think it would be inappropriate for us to have anything to do with Doctor Who because it’s predominantly a family programme.”

She makes a fair point, Torchwood has always been an adult show and has progressively gotten darker as it’s gone on. The latest incarnation, Torchwood: Miracle Day is a prime example.

“I think that where Torchwood is, it deals with darker subjects and I think inter-mixing them, if they want to do that, then fine,” she said, “but I can tell you that I’m not involved in it – they won’t give me guns or a bazooka.”

I can’t be sure what Myles means by that last comment considering has been seen toting guns on Doctor Who before, in “The Stolen Earth” and “Journey’s End,” but regardless, I see no reason why Torchwood’s characters couldn’t be integrated into Doctor Who again (sans guns if that’s a real issue).