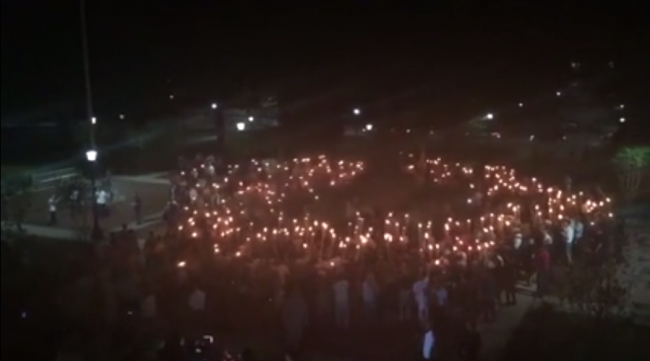 Last night, torch-wielding racists and hate groups descended on Charlottesville, Virginia as part of the lead-up to a “Unite the Right” rally planned for today, August 12, at noon in Emancipation Park. (This park was previously known as Lee Park, and still features a statue of Confederate General Robert E. Lee.) These white supremacists chose Charlottesville, the home of the University of Virginia, because the city decided to remove its Confederate statues and rename two parks which had originally been named after Confederates.

The demonstrators chanted, “End immigration – one people, one nation,” the actual Nazi slogan, “Blood and soil,” “White lives matter,” and “You will not replace us.” Photos of their gathering are below, and if they look eerily like a KKK rally to you…I’m pretty sure that was their loathsome intention.

When a brilliant Ivy League educated man of letters ends a country’s recession and brings health care to millions but happens to be black pic.twitter.com/TGP2VGNAw9

The KKK out in full force tonight in Charlottesville, VA. This is white supremacy. This is terrorism. This is NOT hyperbole. This is real. pic.twitter.com/CfrpCRXff5

This is America. Nazi march on UVA campus pic.twitter.com/FdUyA8FnAN

Tell me again about how they’re not really nazis pic.twitter.com/tVHCzn3blT

As ever when the racists come marching, there were two Americas on display last night. Some brave, outnumbered students from UVA stood in the center of this mob, holding a banner that read, “VA Students Act Against White Supremacy.”

These are literally young UVA students age 17-23 standing up to a sea of white supremacists and neo-Nazis surrounding them #Charlottesville pic.twitter.com/VEU3mU9d3o

Anti fascists are surrounded by hundreds of fascists at Jefferson statue. No police. pic.twitter.com/dsqrzq52fn

Meanwhile, in the nearby St Paul’s Memorial Church, activists, ministers, and other leaders gathered to pray, sing, and discuss strategies for resistance.

In #Charlottesville a packed church of activists and clergy singing/praying/organizing ahead of alt-right rally pic.twitter.com/hX3GbTCU59

Among those in attendance was Dr. Cornel West, who said in an interview with The Guardian: “The crypto-fascists, the neofascists, the neo-Nazis now feel so empowered, not just by Trump but by the whole shift in the nation towards scapegoats…I don’t like this talk about ‘alt-right’, that’s an unnecessary abstraction. These are neofascists in contemporary garb.”

Right now, I can’t find it in me to laugh, but some users have ripped into these “alt-right”/neo-Nazi hatemongers – and readers, I want you to take your joy where you can find it. Many people pointed out that these racists are holding friggin’ supermarket tiki torches, which is evidence that they can’t even advocate for their “supremacy” without tackily appropriating something from another culture. Hashtags like #NaziTinder mock these oh-so-stereotypical-looking marchers. (Warning: some of the contributions to this tag are body-shaming rather than racist-shaming.) If any of that makes you giggle in this nightmare, I’m glad of it.

(Via CNN, Yahoo News, and Twitter; image via screengrab)