But where will they put the gum? 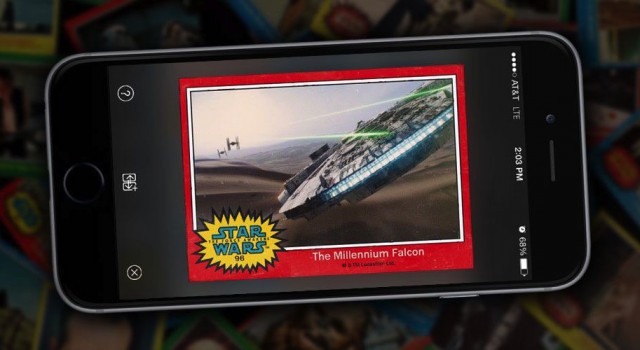 Available on Apple’s App Store right now, Topps has just released the Star Wars: Card Trader app that brings the classic Star Wars card archives stretching all the way back to 1977 into your digital reach for the first time, along with brand new Force Awakens cards so you can collect and trade with your friends just like the old days—but with iPhones. The app features a user experienced designed to mimic those nostalgic memories of opening up a real, physical pack of trading cards and seeing whether or not these are the cards you’re looking for.

It also has fully-featured trading built right in so you can tell everyone what cards you’re looking for, initiate trades, and even negotiate new terms if your trading partner isn’t offering a sufficient bounty. It’s even got nifty animations that play to let you know when you’ve come across a rare card for those of you who don’t already know ahead of time, because you never like to be told the odds.

From the Topps press release:

“In the same way that digital media is transforming reading books, listening to music and watching television, Card Trader is revolutionizing Star Wars collecting,” said Michael Bramlage, Vice President of Digital at Topps. “Your favorite characters, vehicles and locations from the Star Wars universe can be collected and traded on your iOS device, from anywhere at any time.” Star Wars: Card Trader launches with exciting new features, including:

“The same team that brought you the award-winning and top-grossing app, Topps BUNT, is behind Star Wars: Card Trader,” said Bramlage. “It is a must-have app for anyone who considers themselves a Star Wars fan.”

The app is free to download with one free card pack per day. Additional packs are available for in-app purchase.