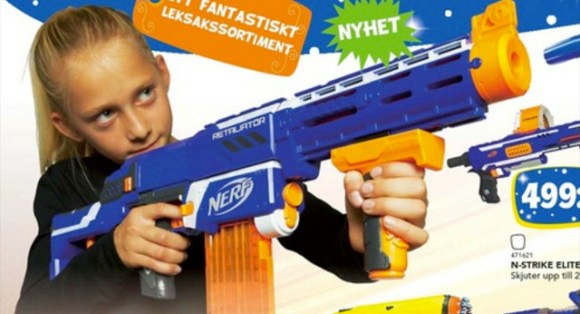 If you’re a toy company called out on enforcing gender stereotypes by filling your catalog with girls dressed as princesses and boys dressed as superheroes, what do you do? If you’re Top Toy, one of Sweden’s largest toy chains, you print a genderswapped Christmas catalog featuring girls with Nerf guns and boys with doll houses and Hello Kitty. Duh.

For the past few years gender equality has been a big issue in Sweden, with laws being introduced requiring teachers to actively work to dispel gender stereotypes in the classroom. The country—clearly after my own heart with this one—has even introduced the gender-neutral pronoun hen.

This newfound pressure to promote gender equality is what got Top Toy to shift focus with their new Christmas catalog. “We have produced the catalogues in a completely different way this year,” says director of sales Jan Nyberg. “For several years, we have found that the gender debate has grown so strong in the Swedish market that we… have had to adjust.”

(Top Toy’s Christmas catalog also runs in Denmark where, interestingly enough, the genders have not been reversed.)

My feelings on this are mostly positive. It reads as a publicity stunt/calculated financial decision, and I can’t imagine that a single toy catalog by itself will really do much in terms of combating gender stereotypes. But whatever. That Top Toys has been forced to change their  public approach to gender does indicate that  Sweden’s active approach toward promoting gender equality is working at least a little bit. It makes me want to go forward in time a few years and see how today’s Swedish children end up. Alas, my flux capacitor is broken.

And before anyone chimes in to say that by showing girls with toy weapons and boys with Hello Kitty Top Toy is just enforcing different (but still not equal) gender roles—I think that years (decades, centuries) of the “girls should play with babydolls and doll houses and princess toys, everything in pink” mindset means that a catalog isn’t likely to pressure girls into asking for a Nerf gun instead of a Barbie if they prefer the latter. I’d hazard a guess that girls who want to play with “girly” toys in addition to/instead of “boy” toys are still going to be OK.