Here Are Our Top Picks for Free Comic Book Day Because Who Doesn’t Love Free Stuff?

Free Comic Book Day on May the Fourth? What a day to be a nerd. 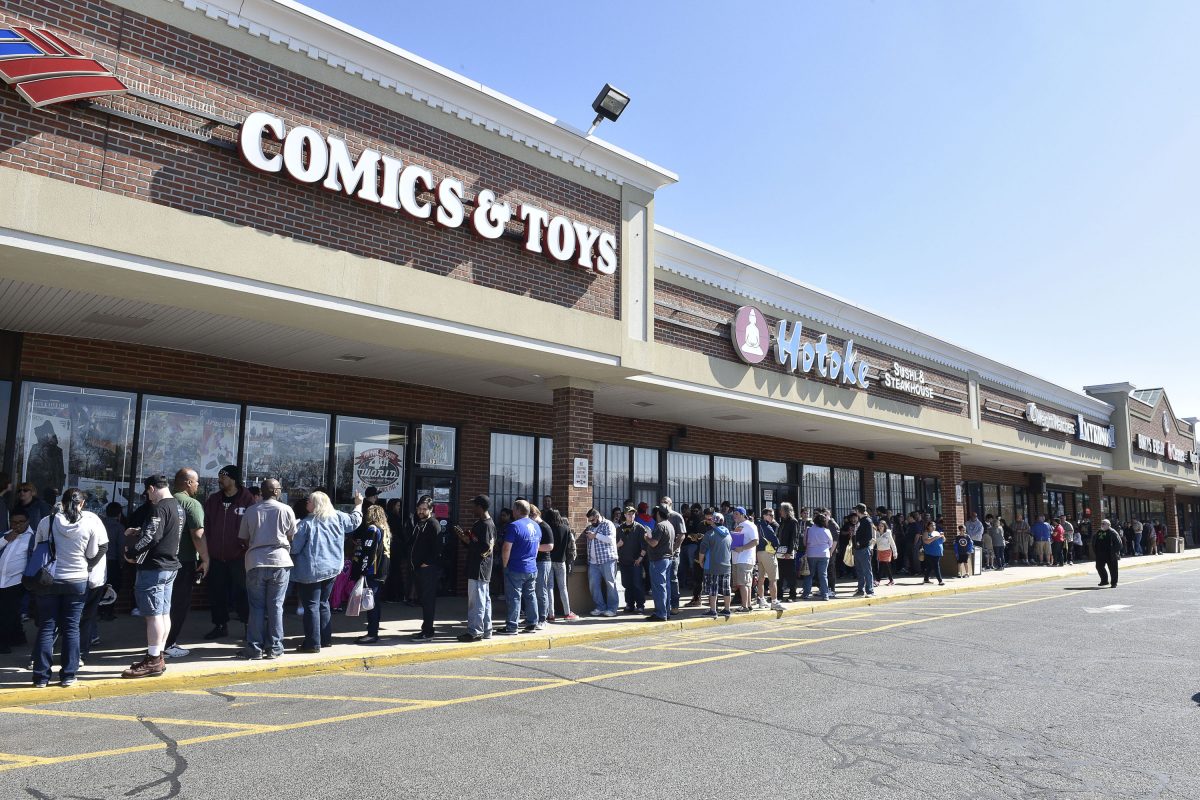 Sometimes the stars and the calendars align to give us the holiest of geek holidays, like some sort of nerd eclipse. This is just such a year, with Free Comic Book Day falling on May the Fourth aka Star Wars Day. What a time to be alive! Free Comic Book Day started in 2002, as promotional effort to bring fans back into their local comic book stores.

The rise of online shopping and digital content has hindered our friendly neighborhood comic shops, much in the same way it’s hindered well, most brick and mortar stores. But even the most devout Amazon addicts can agree that there’s nothing quite like stepping into your local comic book shop and thumbing through the latest issues IRL.

With 51 free issues dropping today, the choices can be overwhelming. Here are some of our top picks for FCBD 2019. But, as always, we encourage you to purchase something while you’re there. Free Comic Book Day is free for us, but not for store owners. Show your favorite local comic haunt some love and throw them some dollars!

Doctor Who, the 13th Doctor 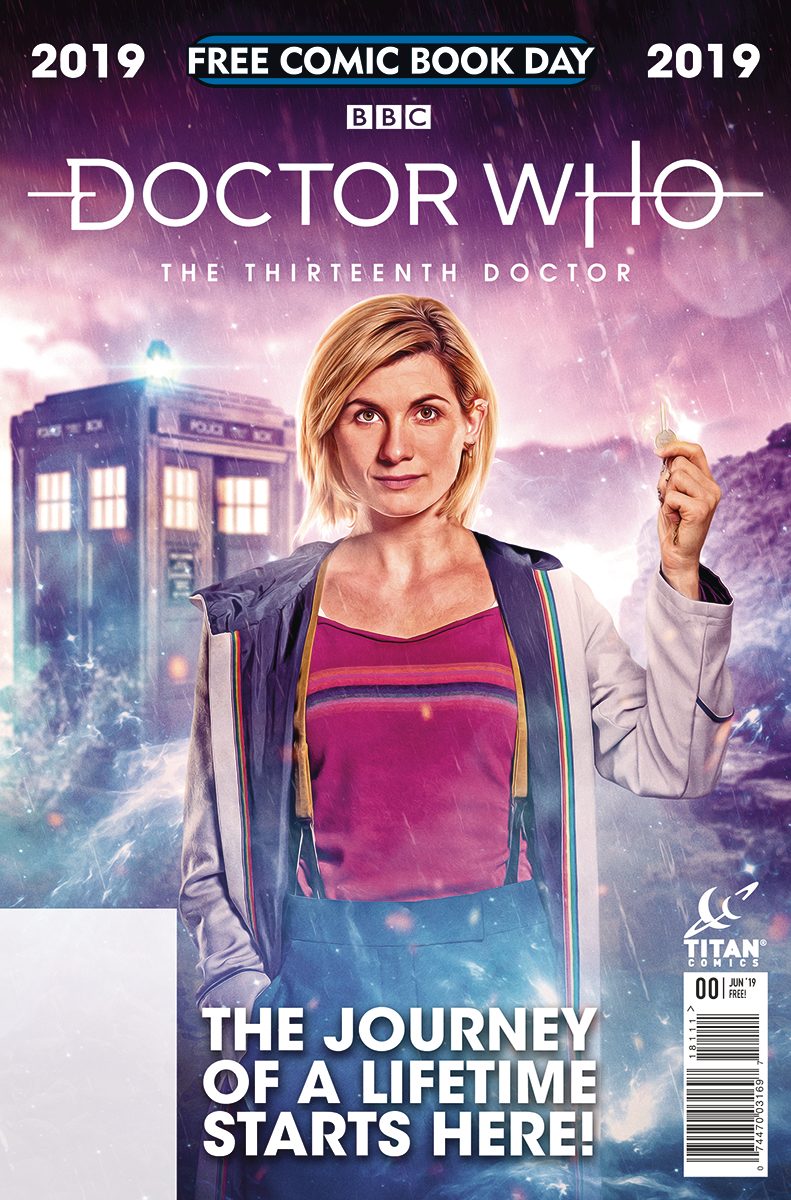 Truth be told, we were always going to be making a beeline for anything featuring the 13th Doctor. But with an all-female team behind the comic, we’re especially excited. The issue is written by Eisner-nominated comics writer Jody Houser (Faith) with art by Giorgia Sposito (Wonderland), and looks to be one of our new favorite series. 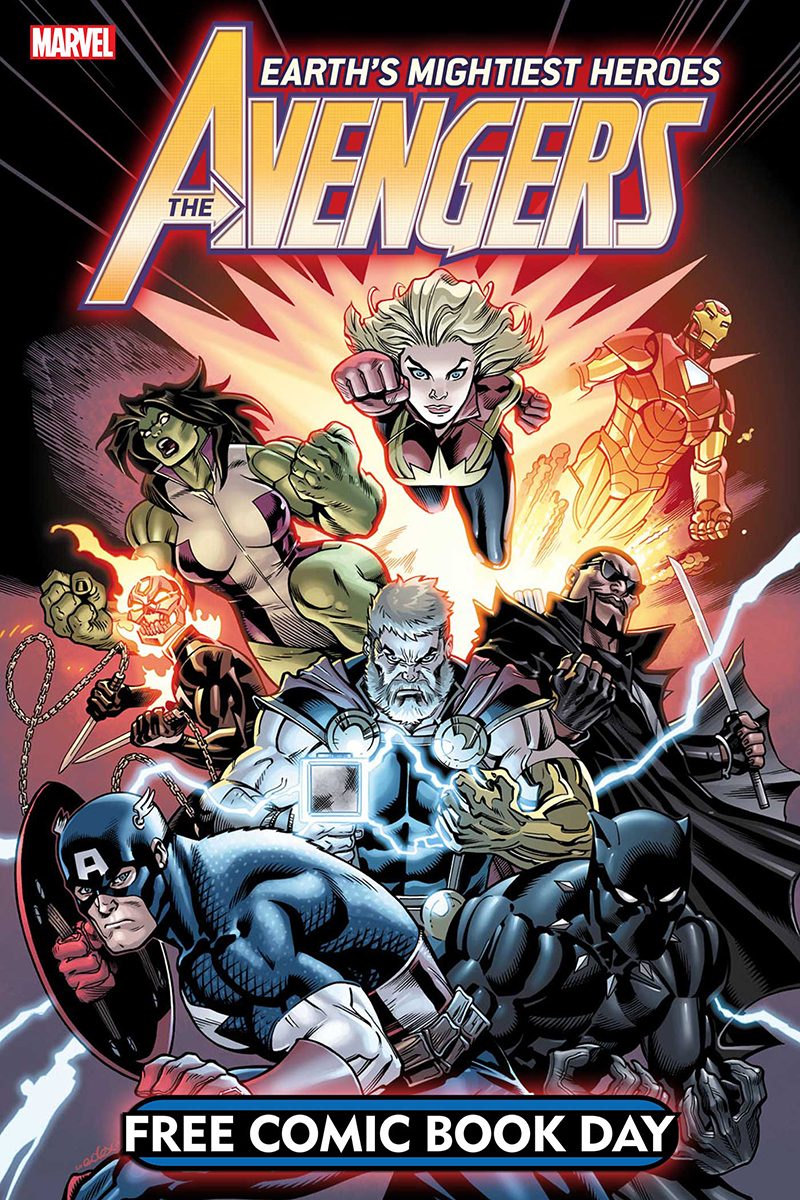 It wouldn’t be Free Comic Book Day without an appearance by the Avengers. Jason Aaron (Thor) and Stefano Caselli (West Coast Avengers) assemble for a new story, while Gerry Duggan (Deadpool) and Mike Deodato (New Avengers) deliver a 10 pager about the Savage Avengers, which will feature the Avengers teaming up with Conan the Barbarian. 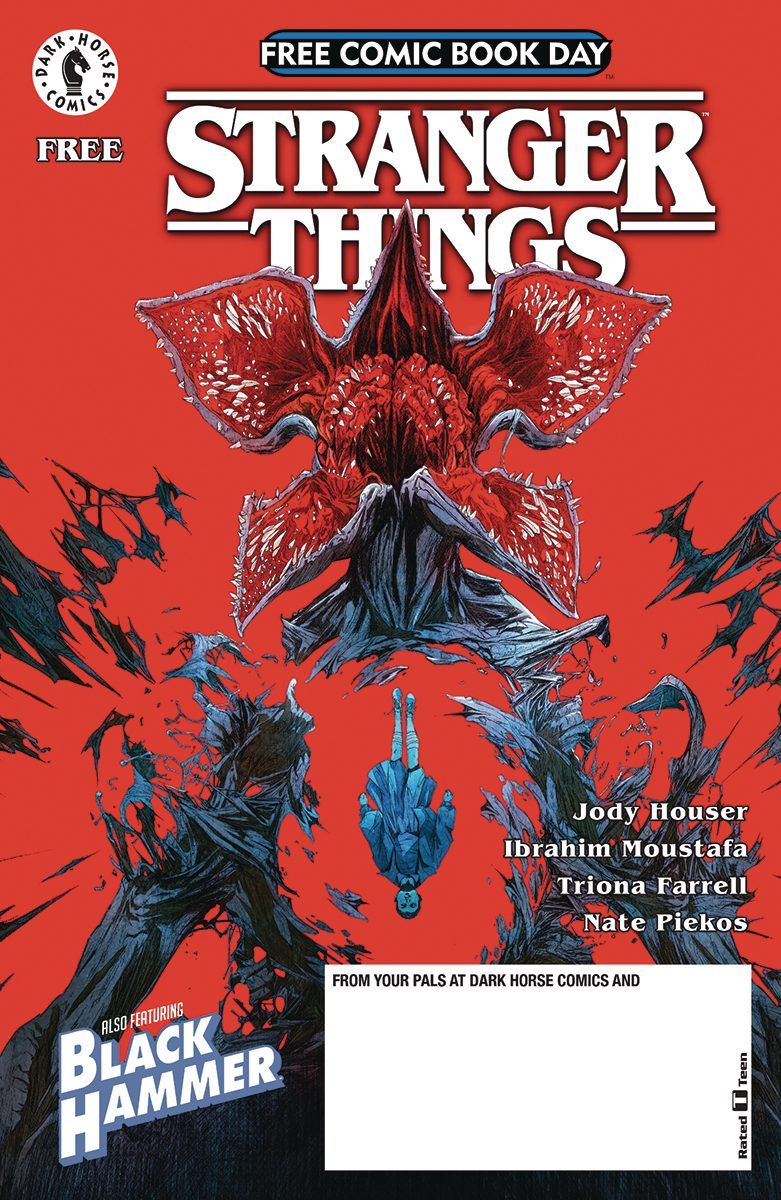 We’re two months away from the premiere of season three of Stranger Things, so get your Hawkins fix with this free issue from Dark Horse. The prequel story is written by Jody Houser (pulling FCBD double duty) and illustrated by Ibrahim Moustafa (JAEGER). the issue also features a story from the Black Hammer universe featuring Madame Dragonfly and a series of creepy stories, by Jeff Lemire (Descender) and Ray Fawkes (Underwinter), with art by David Rubin (Sherlock Frankenstein and the Legion of Evil). 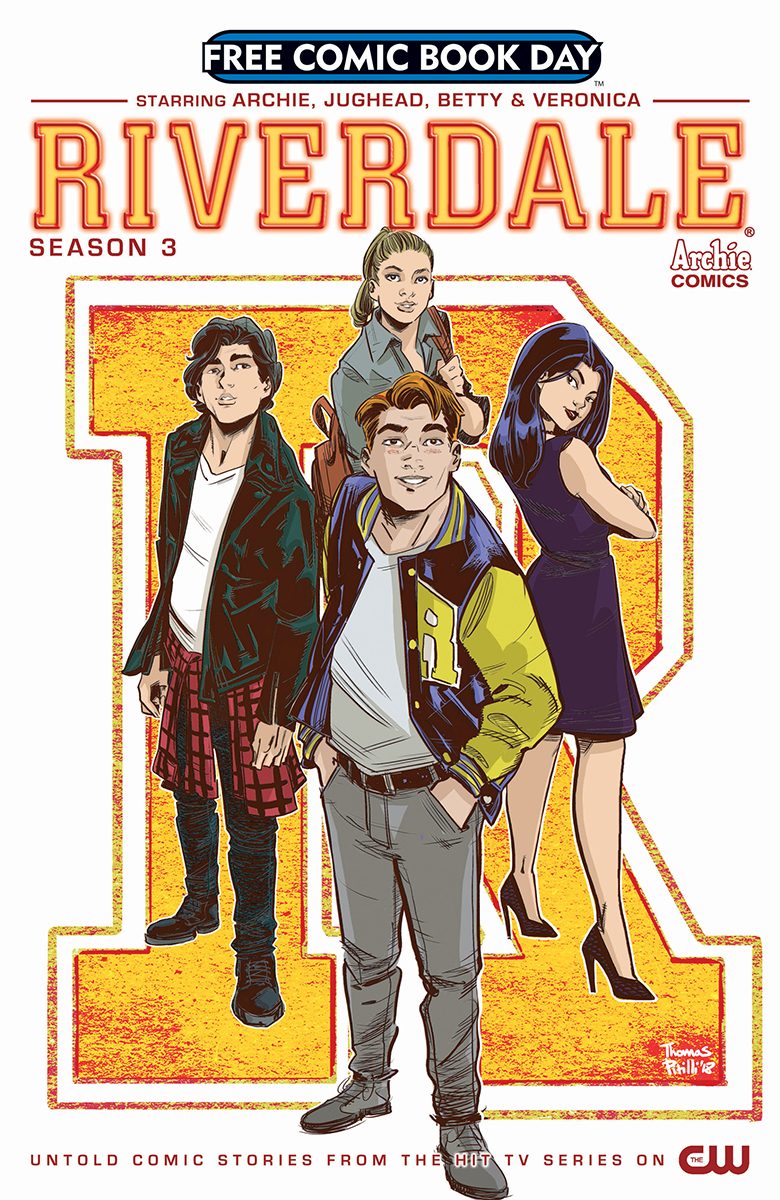 If you’re a fan of the CW’s Riverdale, you won’t want to miss this canon issue by Micol Ostow (Riverdale: The Day Before) and art by Thomas Pitilli (Archie). Besides, who can resist the comics version of Cheryl Blossom and Toni Topaz? No one, that’s who.

Under the Moon: A Catwoman Tale 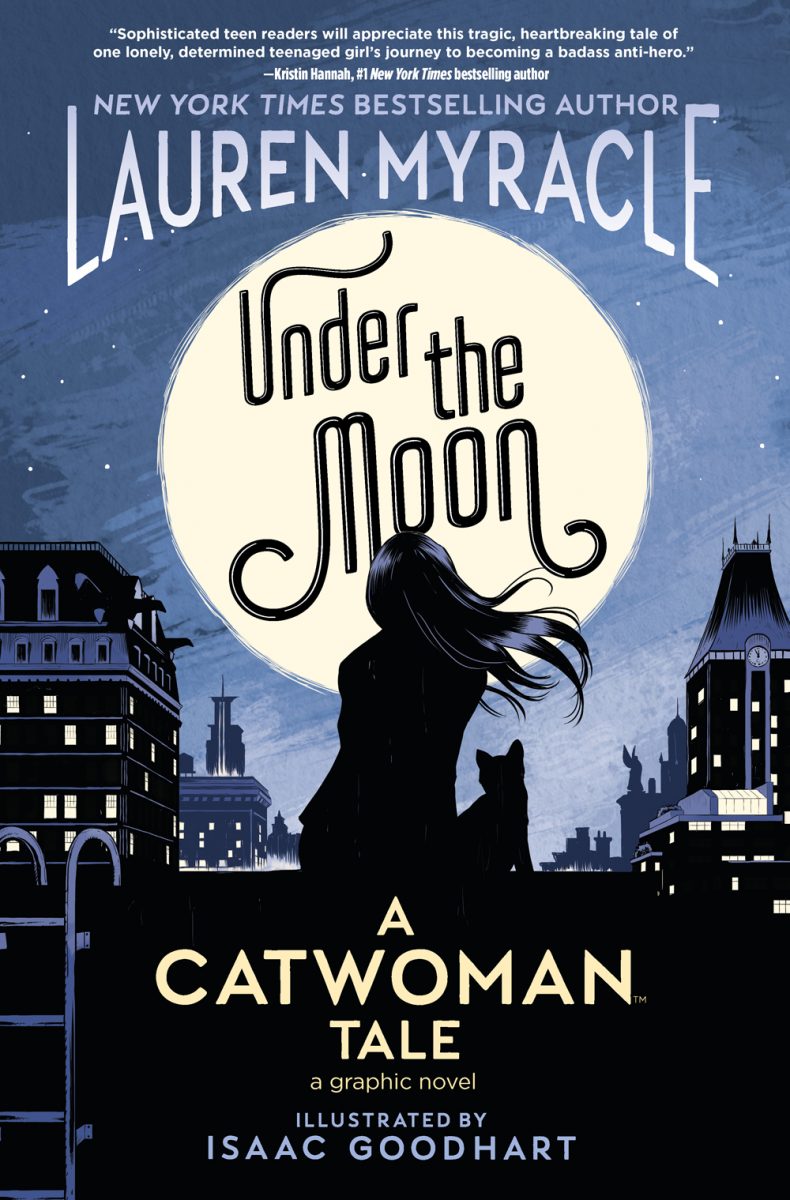 Get a preview of the first chapter from the upcoming graphic novel Under the Moon: A Catwoman Tale from Lauren Myracle (ttfn, ttyl) and artist Isaac Goodhart (Postal), which follows a teenage Selina Kyle on the streets of Gotham. The issue also offers a peek at the upcoming Teen Titans: Raven graphic novel from Kami Garcia (Beautiful Creatures) and artist Gabriel Picolo.

Welcome to the Whedonverse 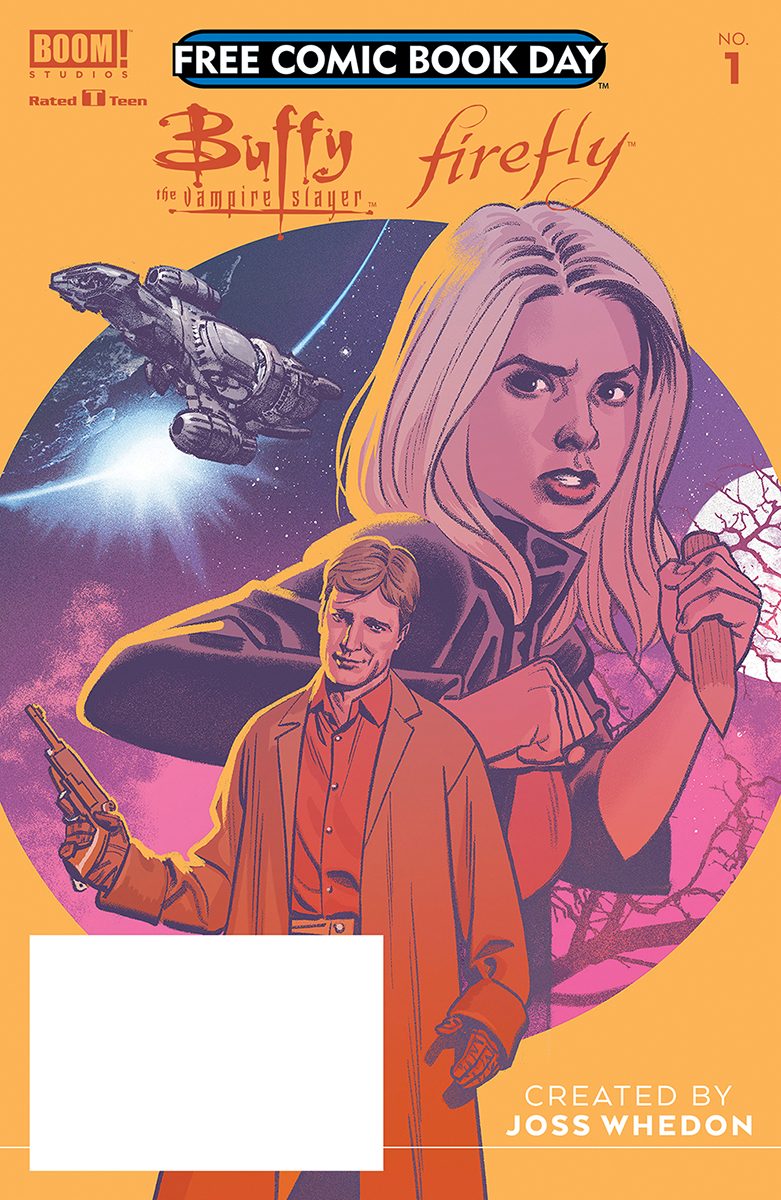 Whedonverse devotees will find a lot to like in this issue that features stories from Buffy the Vampire Slayer and Firefly. If you haven’t started Boom! Studios new updated BtVS series, this story from Jordie Bellaire (Pretty Deadly) and art by Dan Mora (Go Go Power Rangers) and Serg Acuña (WWE) a great place to start. Plus, there’s a new origins story about the Firefly crew from Greg Pak (Ronin Island, Mech Cadet Yu) and illustrated by Ethan Young (Ronin Island). 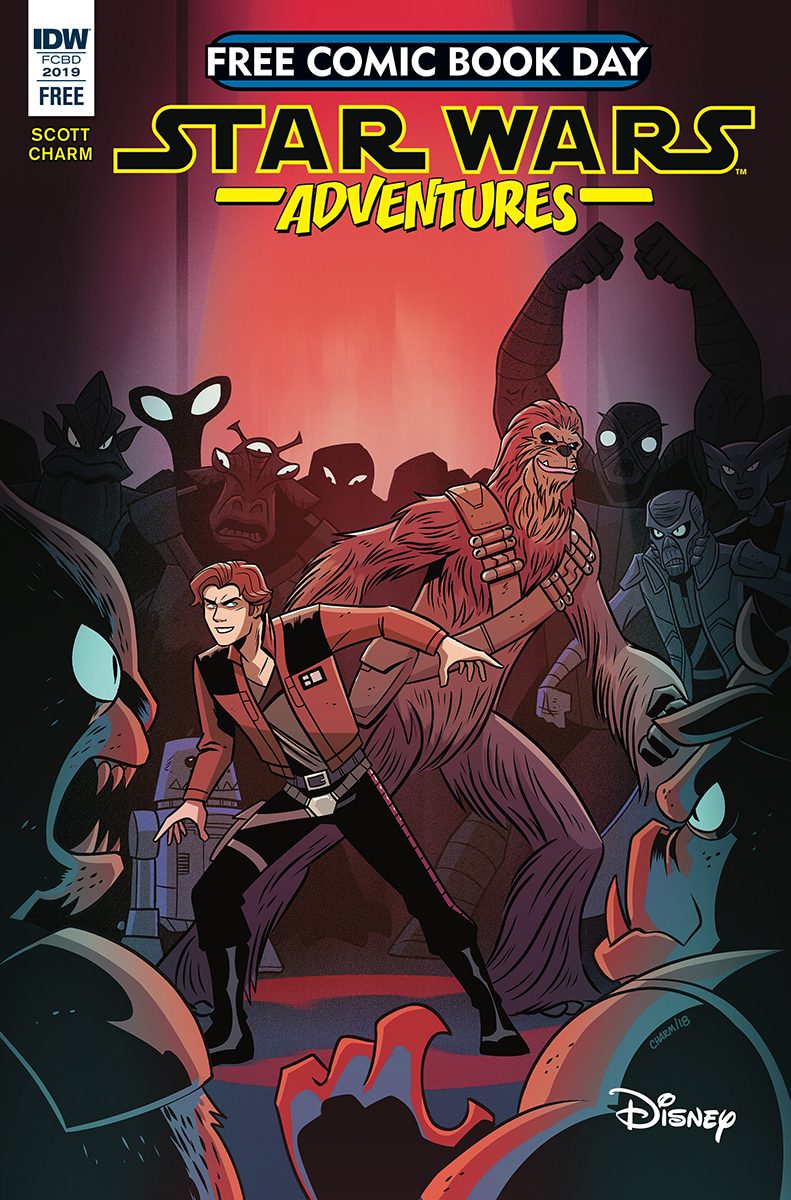 Celebrate May Fourth with an all-new comic from Star Wars Adventures, which follows a pre-New Hope Han Solo and Chewbacca as they fight a space pirate ambush. Cavan Scott (Vikings) and Derek Charm (Unbeatable Squirrel Girl) bring our favorite intergalactic smugglers to life in this colorful new entry.

There are of course, many more comics to check out, but these are all a good starting point. So what are you waiting for? Hurry over to your favorite local comics shop before they’re all out!