Top Gun is Coming Back to Theaters: In 3D 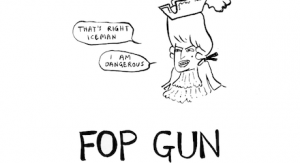 One of the upsides to Hollywood dusting off old releases, dressing them up in the latest 3-D fashions and bringing them back to theaters is that we get to see some things in theaters for the first time in years (or, indeed, that we might never have seen in theaters at all). So, The Nightmare Before Christmas in 3-D? Yes, please, that was nice. The Lion King? Yes, I’ll go see that in theaters for giant 3-D cloud!Mufasa. Both Star Wars trilogies? …fine, yes. I’ll go see that for the Podrace, the Darth Maul battle, and seeing the original trilogy on the big screen.

Titanic? Eh, I guess after James Cameron succeed with Avatar this was inevitable. Not at all like a 3-D rerelease of Top Gun.

And yet, according to the Hollywood Reporter, Top Gun is flying back into theaters some time next year. Rob Hummel, CEO of Legend 3D, who are overseeing the 2D to 3D conversion, talked about the film today at the International Broadcasting Convention.

As I understand it, [Paramout] are planning to release it in 3D in early 2012, though I known they want to get [director] Tony Scott’s approval before they go forward

Hummel noted the movie’s intense action sequences as making it an ideal candidate for 3-D conversion. While it’s certainly not the first thing that come to our mind, it’ll make an interesting addition to the canon of old movies brought back to populate the current 3D craze. Frankly, we’re willing to tolerate the 3D craze to see this old stuff in theaters again.

(story via ScreenRant, top pic from Hark! A Vagrant.)