Because WHY THE HECK NOT. 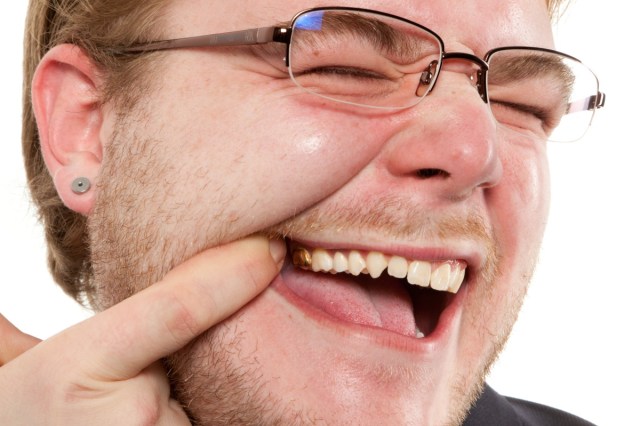 Because science is totally insane and doesn’t care what you think, they’ve decided to go ahead and start restoring sight in blind patients. And because science is really ridiculous, they’re doing it by implanting teeth into eye sockets. Yep, that’s what you do when you’re just that crazy-awesome.

Ian Tibbetts was 27 when a piece of scrap metal hit him in the face, eventually leading to loss of vision in his left eye, and the loss of his right eye altogether. Now 43, Tibbetts had tragically never seen the faces of his 4-year-old twin boys.

One scientist – Brighton’s Christopher Liu, who is the only scientist that performs this procedure – was like, “Naw man, that’s not cool; we want to give you your vision back.” So, in December of 2012, Tibbetts underwent groundbreaking surgery called “Osteo-Odonto-Keratoprosthesis,” which constructs a new eye using a plastic lens and one of Tibbetts’s own teeth. They drill a tiny hole into the tooth, insert the lens into the hole, and then insert the whole tooth into the eye socket. If the retina is still functioning, the patient can see through the tooth-lens window – and the body will never reject it, since the tooth belonged to the patient in the first place. Hard core.

“I had a picture in my head of what [my kids] looked like,” said Tibbetts, “but they were better.” Cue massive, world-wide “awww.”

You’ll be able to catch more of Tibbetts’s story in an upcoming BBC One documentary called The Day I Got My Sight Back, because this guy has a tooth for an eye, and why wouldn’t you want to watch that?

(via The Telegraph, image via Peter Kemmer)