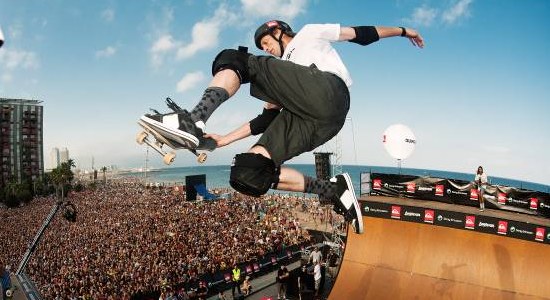 If you’re like us, you’re probably more familiar with Tony Hawk‘s skateboarding and persona through the Tony Hawk’s Pro Skater games than the countless nights you spent up watching extreme sports. But in a world where skateboarding tricks aren’t just a matter of pushing a few buttons, but require world-class athleticism and the risk of personal injury, this is all the more remarkable: At the age of 42, Hawk recently pulled off a 900.

According to Wikipedia, the 900, which consists of a 900-degree aerial spin performed off a skateboard ramp, is one of the most technically demanding skateboarding tricks; Hawk is supposedly one of only four skaters to ever successfully execute a 900, which he first pulled off at the X-Games in 1999.

This time around, Hawk was performing in front of more than 25,000 spectators at the Plaza del Mar beach in Barcelona. After the event, which was actually named after him — the Quiksilver Tony Hawk & Friends European Skateboarding Tour — Hawk modestly tweeted that he’d pulled off the 900: “P.S. I made a 9.”