An on that day, mankind received a grim cheeseburger! 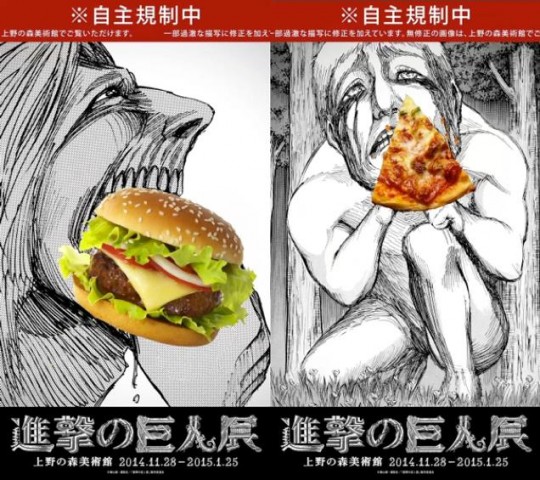 Starting in late November, Ueno Royal Museum in Tokyo is set to host an Attack on Titan exhibit that will feature original manuscripts from the manga, a life-sized model of the Colossal Titan (though probably not to actual Colossal-scale), and VR headsets that allow visitors to simulate life as a survey corp member. But how do you successfully  advertise for a series that’s mostly about giant monsters eating people without making anyone lose their lunch? By adding some lunch, of course!

The above and below ads, which feature grotesque people-eating scenes from the manga being censored by badly photoshopped food, have reportedly appeared in Roppongi Station in Tokyo. 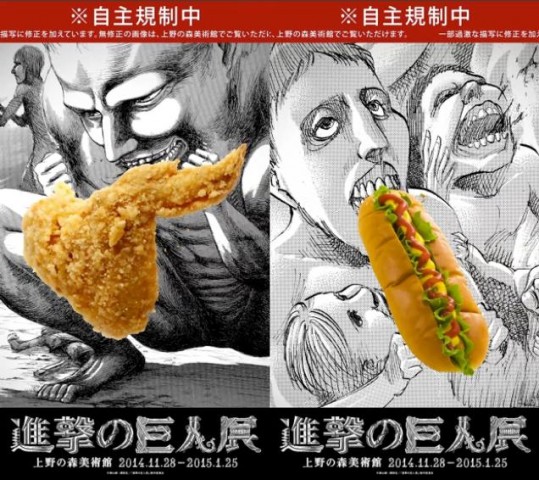 Kotaku reports that the banner at the top of each add, which reads  自主規制中, roughly translates to “voluntary regulation.” And people say that self-censorship is a bad thing.

Of course, this type of humor is surprisingly common surrounding the Attack on Titan franchise, because the series is so grim and horrific that you can’t help but use it as a vehicle for hilarity. Case in point? Go find yourself a copy of the official AoT Junior High AU spin-off series, which is a real thing that series creator Hajime Isayama actually spent time making. It is nonsense.

Previously in Attack on Titan