The end of the world sure is a hot topic right now, isn’t it? We’ve got The Last of Us, The Hunger Games, and of course The Walking Dead in its many iterations. And now even Japan has gotten in on the act with their massively popular new series Shingeki no Kyojin, or Attack on Titan. The manga is currently in serialization (upsetting longtime bestseller One Piece on the sales charts), and the anime has completed its first season to massive praise all around the world. 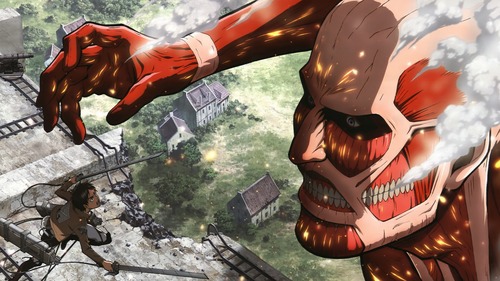 Great action scenes, striking animation, and two bitchin’ theme songs may have contributed to that.

But some of you may remember that mainstream anime has actually tackled more or less this same exact subject material before. A post-apocalyptic world in which the dwindling human population must live in fear of the horrific beasts that rule the lands just outside their last bastions of safety. I’m talking, of course, about Hayao Miyazaki’s second feature film, 1984’s Nausicaä of the Valley of the Wind. 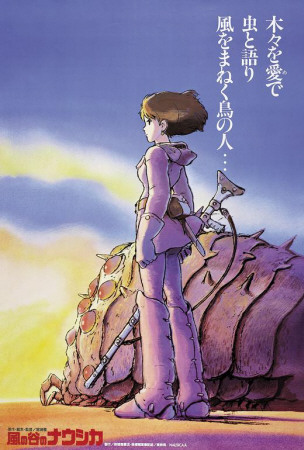 Now, I’ve been to anime conventions. I know that Attack on Titan is incredibly popular right now and beloved by many. But let’s dig a little deeper and see how this series’ storytelling fares against a much older film that showed us just how imaginative Hayao Miyazaki could be.

Minor spoiler warning for Nausicaä (movie only) and season 1 of the Attack on Titan anime from here on.

Nausicaä of the Valley of the Wind is an animated movie based on the first two volumes of a manga that Studio Ghibli founder Hayao Miyazaki created (and continued to write for another 10 years after the film came out). It tells the tale of a young woman named Nausicaä and her quest to understand the “Toxic Jungle”—an expanding swamp filled with giant insects and poisonous spores that threatens to eradicate what’s left of humanity after an ancient war decimated the population. 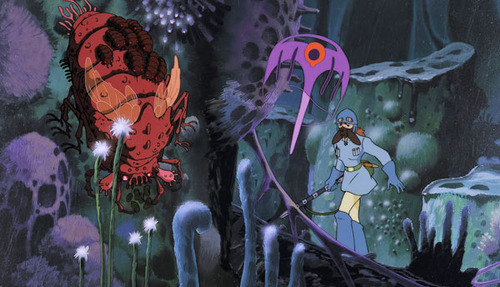 The animation hasn’t exactly aged perfectly, but the music and creative creature and vehicle design are still impressive to this day.

As far as I’m concerned, we can take or leave the environmental message and Nausicaä’s idealistic pacifism for the purposes of interpreting the movie’s story. Those are stylistic choices and don’t really impact the way the tale is told, same as with Attack on Titan’s somewhat Spartan view of the value of a single human life. Though these elements are important thematically, the two works can be compared without debating the merits of their respective philosophies.

And I’m sorry, but here’s the part where, despite my non-confrontational nature, I kinda have to make a lot of people mad. *ahem* I think that Attack on Titan’s story, at least at this point, is just terminally uninteresting. 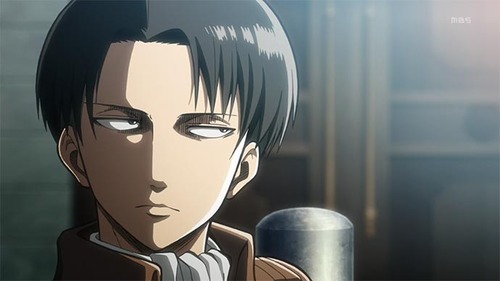 Yes, the world that the story has created is deep and complex—perfect for speculating on the origin of the titans and how everything in this walled society works. I can even accept that the “humanity doomed itself” theme is presented as unsubtly as a brick to the head with literal monster humans eating people, because everything is completely over the top anyway. The intrigue of the world is what kept me watching through the whole season (and the fights helped, too). But what’s the use in having a cool idea to explore if the characters that are supposed to carry it out are so flat and unremarkable? Why should I care that someone died if their personality can be described in a single word? And, most of all, why even try to predict exciting story turns when the writers make the most obvious and predictable choice every time?

Let me back up. As we’ve established, post-apocalyptic settings have been done to death, especially recently. To be successful, all Attack on Titan had to do was give that setting a new coat of paint. And it did that spectacularly in its character design, art style, and music choices. But to truly evolve the formula and become a worthwhile classic in its own right, it needed to put more effort into how that setting would affect the characters and their relationships with each other and the society at large.

While I was watching Attack on Titan, I was trying to figure out why I wasn’t invested in any of the characters’ actions or internal struggles. They certainly exhibited strong emotions, to the point where a hypothetical drinking game based on whenever someone yelled was quickly abandoned for fear of my liver shriveling up in protest after the first episode. But then I realized something—all of the conflicts were reactions to the base human emotion of survivalist fear.

Eren wants to kill the titans because they killed his mom. The Scout Regiment routinely lets the death of a few save the lives of many. The government mistrusts everyone because they want to keep their position of safety. Every major character motivation stems from a very concrete “us versus them” fear of the titans. And while that works in some life or death action scenes, it just isn’t enough to build a complex story from.

Nausicaä, on the other hand, chose to focus more on the effect the Toxic Jungle had on human society rather than just the direct relationship between the survivors and the giant bugs that could destroy their livelihood. Most of the conflict in the movie comes from Nausicaä trying to reason with the leaders of the militaristic Tolmekia, who want to eradicate the Toxic Jungle with an ancient weapon they can’t fully control. The continued existence of the Valley of the Wind is threatened when Tolmekian soldiers barge in to make it their base of operations for the counterattack. This plotline is interesting because the characters have many different motivations for their actions—a lust for power, hope to stop the spread of the jungle, protection for their loved ones, or even just resentment against the aggressive foreign soldiers. The fantastical setting is present more to see how humans would react when put in that situation, rather than just for its own sake. 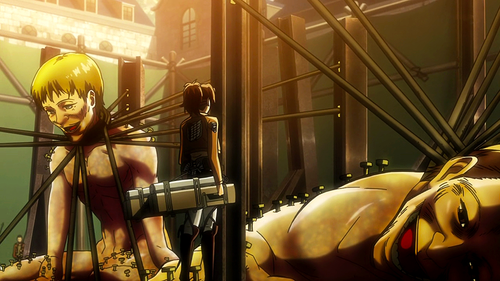 The only character in Attack on Titan whom I find interesting so far is Commander Hange, the scientist who is fascinated with experimenting on titans. She doesn’t seem to fear them, and she even gives them names. The purpose of her research is to learn more about titan biology so that the soldiers can more effectively kill them, but her boundless enthusiasm for the job and sympathetic attitude towards her test subjects gives the impression that she’s more interested in the pursuit of pure knowledge than eradicating a threat. Hange is unique in that she actually cares for the lives of these creatures that everyone else hates with a white-hot passion. She mourns when her two test subjects are killed, finally giving Eren pause for thought about the true morality of the titans. Unfortunately, this doesn’t get brought up again in any kind of meaningful way. I hope that, as the story progresses, this graying of Eren’s moral compass gets more attention. But since the pacing of the anime is so torturously slow, we might have to wait for season 3 until it’s addressed…

Since Attack on Titan is still a work in progress, I can’t rightfully declare a winner between the two at this point. The most I can say is that Nausicaä of the Valley of the Wind is an excellent example of how to use a post-apocalyptic setting to explore complex themes with a cast of characters whose decisions are informed by their unique surroundings, and Attack on Titan should probably start taking notes. I really love the world that this anime has created, but its paper-thin characters can only carry that weight for so long before it just becomes another novelty. I want to believe in you, Attack on Titan. Prove me wrong.

Previously in Attack on Titan