The Secret Loves of Geek Girls Preview | The Mary Sue

Nothing goes together quite like geek girls and romance comics. 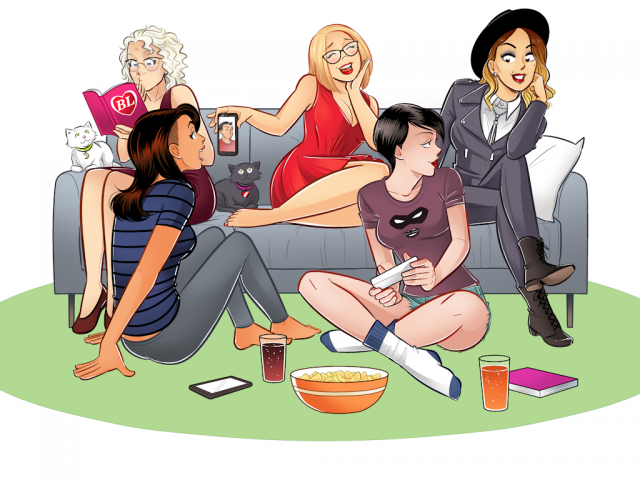 The Secret Loves of Geek Girls, a mixed-medium non-fiction anthology featuring comics, prose, and illustrated stories, takes us into the lives and loves of some of comics’ and literature’s most intriguing and talented female creators (like Margaret Atwood and former TMS Associate Editor, Sam Maggs!), edited by Hope Nicholson. In a TMS Exclusive, The Secret Loves of Geek Girls presents a preview in the form of the short comic story “Better Than Fiction,” in which Sarah Winifred Searle (whom we interview below!) discusses the loves of her life. 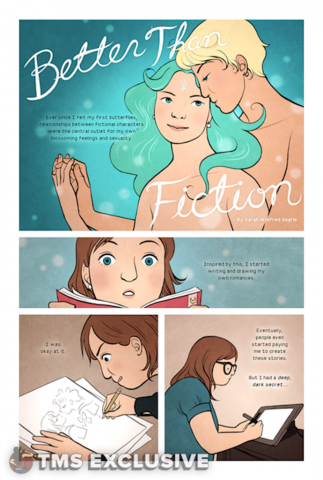 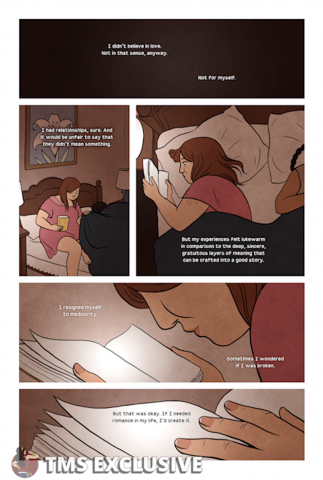 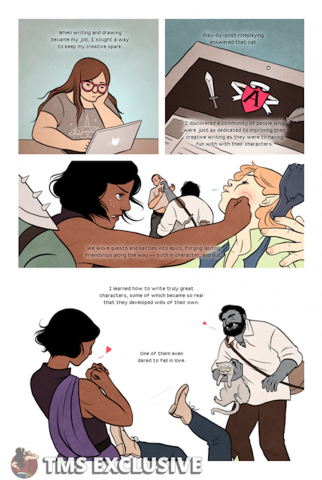 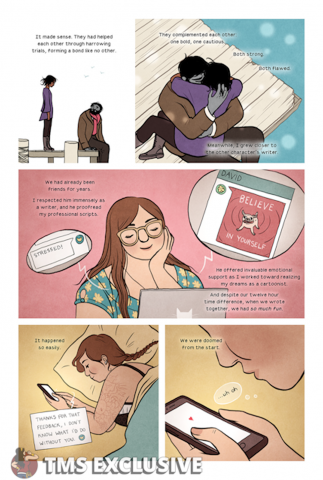 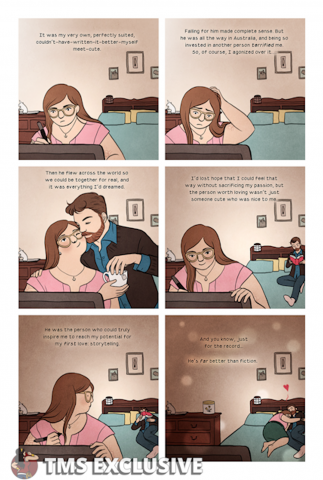 TMS had the chance to talk to Searle about her comic, as well as the experience of being in such illustrious company on such a rad project!

Teresa Jusino (TMS): Tell us a little about your comics creator history!

Sarah Winifred Searle: I’ve been making comics since elementary school and first started self-publishing as a teenager, over ten years ago. It took me awhile to get into a good, productive groove –– made my fair share of (quickly abandoned) webcomics and such. But a few years ago I managed to finish a graphic novel, and since then, I’ve churned out numerous anthology contributions and other small projects. I recently started working on another long-form story (“Ruined” for Fresh Romance, co-created with Sarah Vaughn), which feels really good. I’m hoping to do another bigger project on my own sometime soon, hopefully in 2016.

TMS: How did you come to be involved in this project?

Searle: Things had already been on my mind, then when I saw the anthology announcement, they came together into an idea for a pitch. So I emailed Hope and was fortunate that she thought said idea was a good one!

TMS: What’s it like being in a collection with Margaret Atwood? :)

Searle: Can’t lie… it makes me feel a little fancy.

TMS: Is “Better than Fiction” actually Based on a True Story? Please tell us you’ve actually met this wonderful man!

Searle: Yeah! The entire anthology is non-fiction, and my story is 100% autobiographical. Still can’t believe my luck.

TMS: Do you still play role-playing games? LARP-ing? Tabletop/computer RPGs? What are you into geek-wise these days?

Searle: I still love play-by-post, but I haven’t had time for it lately! Poor David’s stuck waiting on me until we can finish some stories we were working on. He’s also run D&D campaigns for different groups of our friends and those have been a blast. Alas, too many comics to write and draw these days, so those hobbies are on the back burner… but that’s a pretty great problem to have, so I can’t complain too much.

TMS: Tell us why you think TMS readers will love The Secret Loves of Geek Girls?

Searle: We have such great audience and contributor crossover! TMS regulars may recognize Sam Maggs in particular. The anthology features quite a few other geek girls of renown, and the thoughts and experiences they’re sharing will resonate with geeky women of all sorts of ages and backgrounds.

Unsurprisingly, this awesome project has already exceeded its $30,160 goal. However, if you want to ensure that a copy of this anthology gets to you, check out their Kickstarter page and pre-order one!