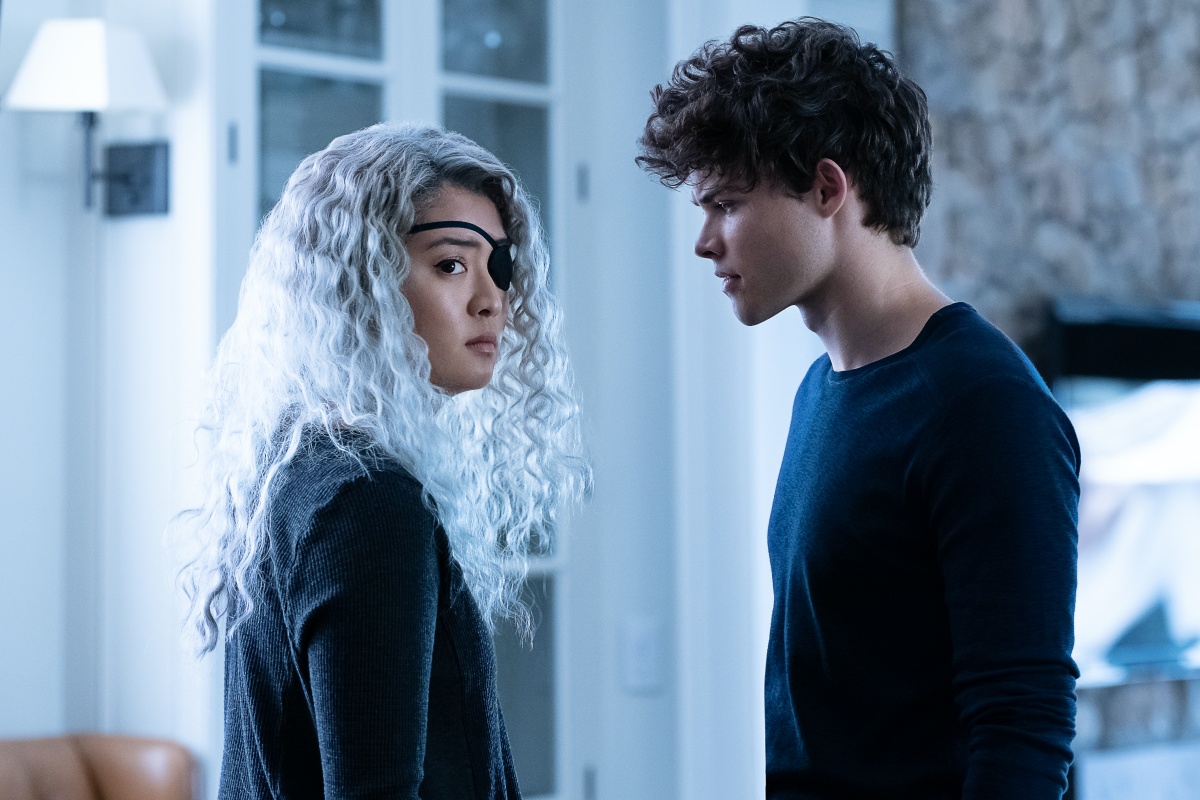 I got some pushback from people when I wrote that DC Universe’s Titans has a problem with pacing and storytelling, yet as I watched the final episode of season two (and we know season three is coming), I just saw all the same problems that were prevalent last season and earlier in this season—great cast, great ideas, but no sense of pacing or ability to allow one storyline to finish before starting three others. Trying to shove CADMUS, The Judas Contract, a bunch of flashback material, and Blackfire into one season just left most of the cast underdeveloped again.

In episode 12, we get another flashback episode that explores Rose’s relationship with her father, Slade, and her transformation into Ravager. It’s mixed with Hank going through a crisis cage fighting, having bad sex, and doing drugs to find some meaning to his existence in a show that has only given him like … what, 2. 5 hours of screen time across twenty-six episodes? Having Rose replace Tara as the “Terra” in this storyline is a very messy choice when the storyline itself is already kind of dated—especially when Rose’s conversion to a Titan just seems very spontaneous. I guess Jason is just that good.

What follows in the finale is an episode that has to wrap up the Slade story, CADMUS, Raven’s power issues, Hawk/Dove, and whatever is going on with Kory. Let’s be clear that having most of Titans go break into CADMUS and rescue Conner and Gar should be its own season finale episode. CADMUS is a huge part of DC Comics’ evil tech world, and we know they’re mixed up with Lex Luthor, so the fact that they feel like a B-story is so disappointing. I know we might get more next season, but again, it just feels like a lot of filler.

It doesn’t help that Slade, the big bad who has been played to perfection by Esai Morales, is gone from the story within less than 15 minutes. Much like Trigon, it was a lot of hype and not a lot of payoff when it was time to wrap things up. Then, the secondary story with handling the mind control takes another 15 minutes. I enjoy Conner’s character, and while he does make a good addition to the team, it feels weird that we have gotten so much of him in this season and so little of so many others.

There’s a major character death this episode, and man did it piss me off, because the character really had nothing to do this season, and it felt like a really cheap way of trimming the fat of the cast besides the several other options they could have chosen.

Plus, the relationships that should matter don’t even get to shine. Kory and Raven only get one whole episode with each other, even though Rose and Jason are replacing the Terra/Gar relationship from The Judas Contract. It’s so underdeveloped I don’t even really know why they are attracted to each other, beyond just pair the two teens. Everything about it is just so emotionless. I suppose there was some level of trying to surprise us because we would know who Terra was if she appeared on the show, but that’s part of the point of these arcs. It’s that slow burn of waiting for it all to come together, not just throwing everything into a pot and hoping it makes stew.

We got really no furthering of the relationship between Dick and Kory, Raven and Gar remains in a weird space because of real-life ages, and the Dawn and Hank relationship remains … there. In the end, I just felt pretty empty because, despite enjoying some scenes and moments, the series remains really unbalanced in a way that needs to change.

Other choices and production issues just kept bugging me. Depowering Kory got on my nerves; not only is that an annoying trope for female superheroes anyway, but it just happened with no explanation. Plus, the optics of the four female members being helpless against Deathstroke and needing to be saved by Dick in his Nightwing costume may have been a good money shot, but for it to be at the expense of Donna Troy, Kory, Raven, and Dawn’s own abilities to hold their own was trash—especially when they show, just a few minutes later, Donna be able to mostly go punch-for-punch with a half-Superman clone.

When is Beast Boy going to be anything other than a tiger? In addition, there are simple things that just feel sloppy, like Donna’s hair being a completely different length from episode to episode. With the exception of Kory’s wig, all the hair just looks so bad. Even with Raven’s hair being the right color, it’s as if no one ever brushes it out. It just remains this stiff, sometimes-clumped-in-the-back mess that’s just disappointing to look at because it’s not as if the show is doing groundbreaking special effects every episode. We’ve barely seen Kory use her powers all season, so the least we can get is some decent hair.

I hope the next season takes a break from bringing in all the potential new characters they teased and just allows the characters to sit in their trauma and heal a bit. Titans has a lot of potential to be a great show; it has all the bits for it, but it just needs structure and maybe a longer season.