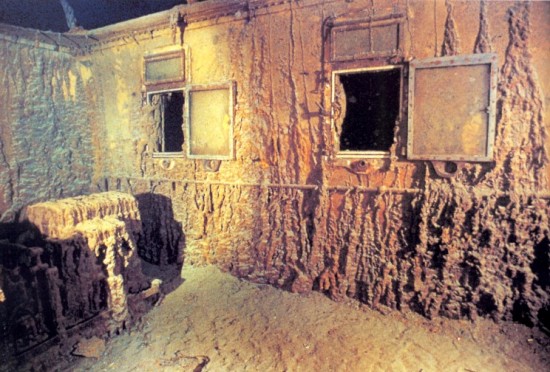 The Titanic has loomed large in the public imagination since her sinking in 1912, bolstered by her rediscovery in 1985, and a certain late-90s film. However, the boat will not be large for much longer, as it is being consumed by metal-munching bacteria. The stalactite-like structures that the bacteria leave behind, called “rusticles,” have been observed since the wreck’s first exploration in 1986.

However, these bacteria aren’t working alone. Instead, they have formed a massive colony that functions like a single organism. From The Daily Galaxy:

These live mats and rusticles form a communicating super-organism funneling iron-rich fluids, sulfur, and electrical charges through the collective of archea, fungi, and bacteria that thrives in the icy dark, low oxygen waters. Using DNA technology, researchers discovered that the rusticles were formed by a combination of 27 different strains of bacteria.

The methodology behind the organism’s communication ability is still not fully understood, but scientists think that it is through a process called “quorum sensing.” This allows the disperate individuals to “sense” each other and operate more effectively. It’s been observed in bacteria before, and is thought to be behind some of the behaviors of social insects like bees and ants.

This super-organism’s effect on the wreck has been striking. Observations of the ships degradation have found that the twisted, fragmented aft section is deteriorating much faster than the relatively intact bow section. The rear of the ship is thought to be 40 years ahead of the bow in terms of deterioration. In 2010 Dr. Henrietta Mann, one of the scientists that identified the metal-consuming bacteria on the ship, said, “In 1995, I was predicting that Titanic had another 30 years . . . But I think it’s deteriorating much faster than that now. Eventually there will be nothing left but a rust stain.”

(The Daily Galaxy via BoingBoing, image via Titanic Universe)