With Felicity Jones hosting, you knew they would bring the Star Wars

In case the intent wasn’t clear enough, Jones even asked, “Are you a Star Wars princess?”

“No, I got this at Eileen Fisher,” said Fey.

Kenan Thompson was also on hand to deliver the hologram, doing his best Saw Gerrera impression. 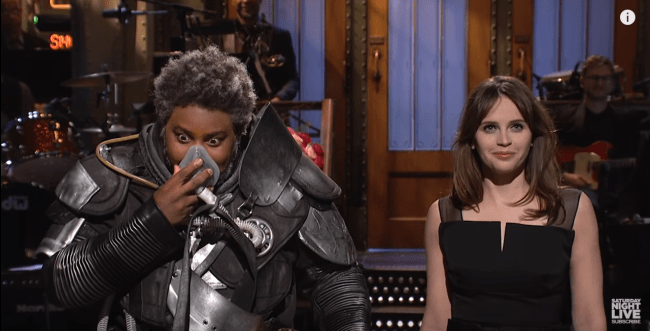 This skit aired on the same night that NBC replayed the 1978 SNL episode hosted by Carrie Fisher, who played the original Princess Leia and passed away last month. Fisher’s episode aired an hour and half before Jones’ kicked off.

Though the scene was mostly in the spirit of parody, Fey did offer some Fisher-esque advice to ignore the naysayers and just get out there and do it. After all, she said, “no matter how it goes, the President of the United States will say that it’s sad and overrated.”

“Yeah. The President. It’s all right, no one cares.”

(Via Deadline and The Hollywood Reporter, image via screengrab from SNL’s YouTube channel)