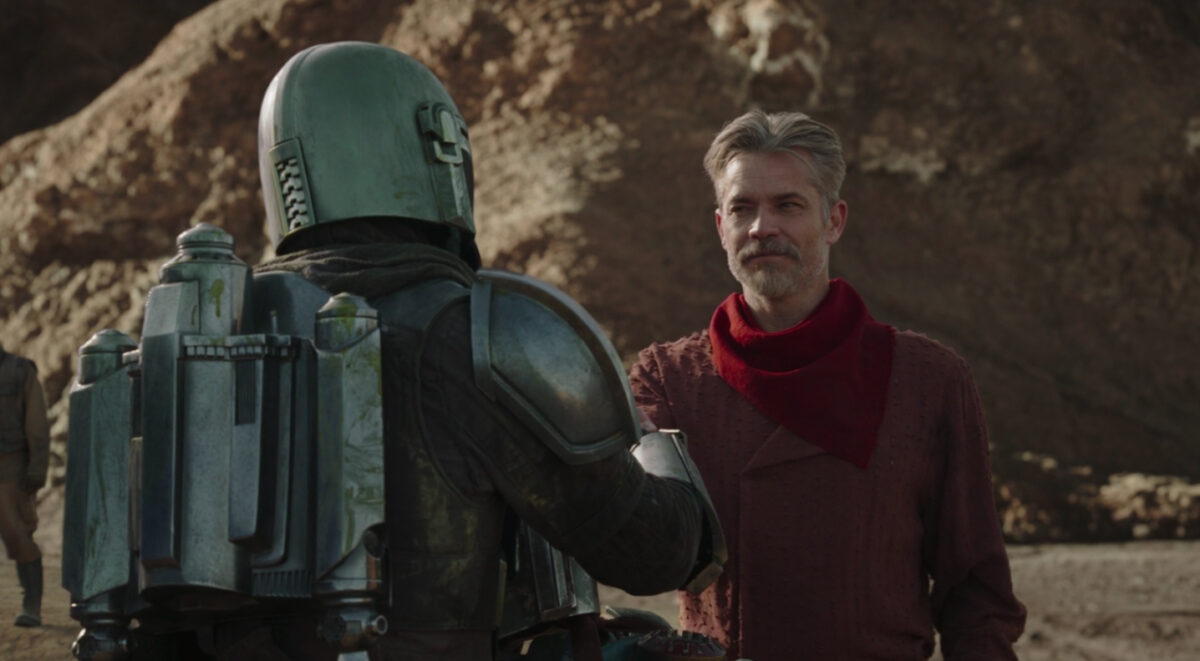 ** Spoilers for the Season 2 premiere of The Mandalorian lie within**

We’re back, baby! In the season 2 premiere of The Mandalorian, an episode titled “Chapter 9: The Marshal,” Mando is on a journey to try and reunite Baby Yoda with his kind. The problem is that he doesn’t know where to start and he’s working his way through people scattered throughout the galaxy to find out what they know.

In the premiere episode, he hears of a Mandalorian on Tatooine, and he rolls up to Peli Motto (Amy Sedaris) and asks her of this mysterious Mandalorian on Mos Pelgo. The problem is that she doesn’t think that anything is there but still, he takes a speeder and goes on a mission to find the man who is meant to help him.

There, he meets Cobb Vanth, who is not actually a Mandalorian but is wearing some extremely famous Mandalorian armor: That of Boba Fett. First off, I have to talk about how Cobb got this armor because basically the Jawas found Boba’s armor and said “oh look, this is nice” and just took it and then gave it to Cobb Vanth when he came to town. Honestly, iconic.

But Cobb Vanth is an interesting character from Star Wars lore. Played by actor Timothy Olyphant (Justified), he comes to Freetown as a human who survived the Galatic War and gains their love and respect because they fully believe that he is a Mandalorian. He admits to Mando that he’s never met a real Mandalorian and basically the entire episode we get to see Timothy Olyphant looking attractive while doing things with the Mandalorian. No complaints.

Vanth is from the novel Aftermath and is a former slave of the Mining Collective who escaped and ended up in Mos Pelgo (and eventually Freetown) where he became mayor. If this was season 1, their relationship would probably be a lot different because Vanth DID basically take a Mandalorian armor without being. But at this point, Mando is so dedicated to finding where Baby Yoda belongs that once he requests Vanth hand the armor over, their battle of egos quickly falls to the side as they have (for lack of a better phrase) bigger fish to fry.

What’s interesting about this premiere episode compared to season 1 is that Mando is willingly accepting help. He’s trying to find information and when Vanth doesn’t have anything for him, instead of just leaving, he stays to join him in saving Freetown. It’s a significant bit of character development. I hope that this dynamic keeps up throughout the season because I thoroughly enjoyed watching Mando and Vanth working together. There is going to be (more) trouble brewing for Mando, however, because at the end of the episode, Vanth stays true to this word and gives Mando the Boba Fett armor and … Mando might be coming face to face with the man himself soon enough.

At the end of the episode, it is revealed that Temuera Morrison (who played Jango Fett in Attack of the Clones but was revealed that his son was just a clone of himself) was watching on Tatooine and Mando’s mission to get the Child back with his kind just got a lot more complicated. We knew Temuera was joining the show, but we still don’t know who he’s playing, and it was quite the twist to see him watching.

This first episode was an incredible look into what lies in wait in season 2 of The Mandalorian and we can’t wait to see where we go next.