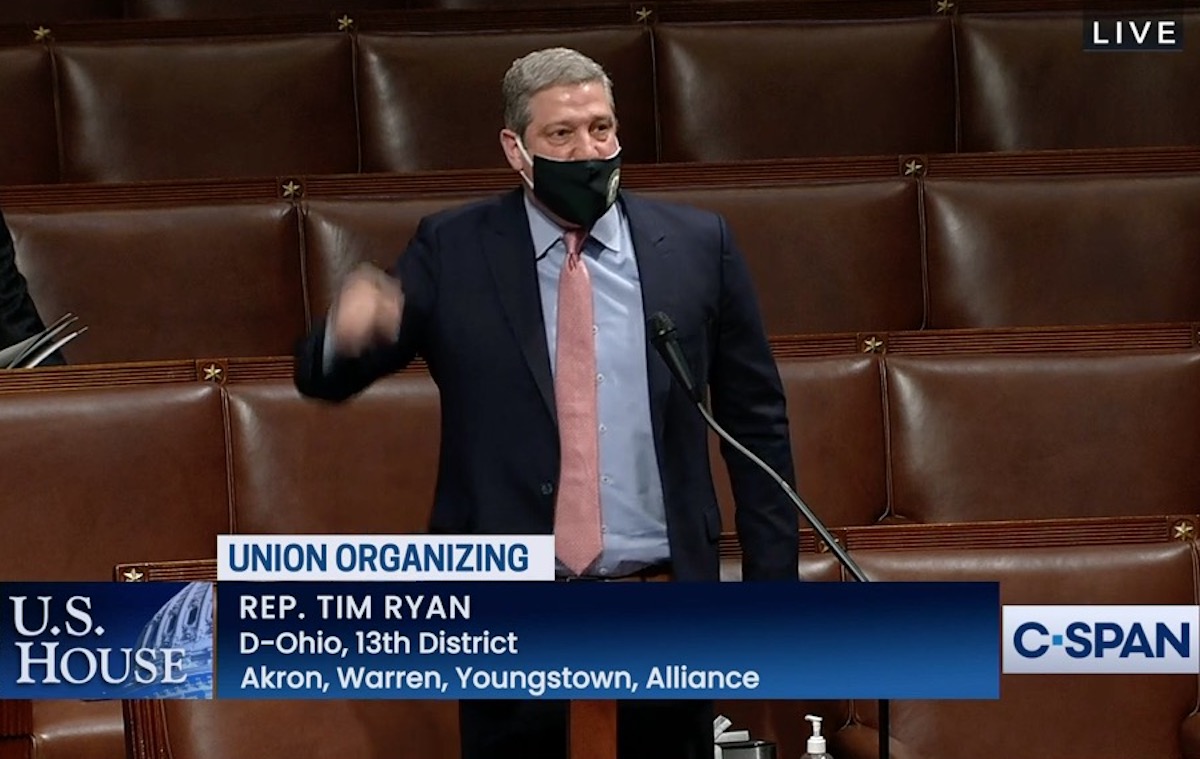 As the House prepares for its final vote on the COVID-19 relief bill, Rep. Tim Ryan took to the House floor to absolutely let loose on his Republican colleagues.

Republican politicians and conservative media outlets have spent the last week or more nearly entirely ignoring the COVID-19 pandemic and the debates around the relief package. Instead, they’ve committed to voting against it and anything else Democrats propose, while also focusing their rabid attention on ridiculous “cancel culture”/culture war non-issues like Mr. Potato Head and Dr. Seuss.

“Heaven forbid we pass something that’s going to help the damn workers in the United States of America! Heaven forbid we tilt the balance that has been going in the wrong direction for 50 years!” Ryan yelled in a clip that’s since gone viral online.

“Stop talking about Dr. Seuss and start working with us on behalf of the American workers!” he shouted.

Rep. Tim Ryan (D-OH) yells at the GOP over union organizing bill: “Heaven forbid we pass something that’s going to help the damn workers in the United States of America.”

He adds: “Now stop talking about Dr. Seuss, and work with us …” pic.twitter.com/0RbmxQUPxB

An overwhelming number of American voters on all points of the political spectrum support this coronavirus relief package. But Republicans are working so hard to find a distraction that they’re forcing themselves to pretend that they think the discontinuation of six relatively obscure Dr. Seuss books containing racist imagery is more important than a global health pandemic, an economic crisis, and the deaths of more than half a million Americans.

The only reason the GOP is talking about Dr. Seuss and Mr. Potato Head and Cancel Culture is that Biden doesn’t make their base angry enough and the only way for the GOP to exist is for their base to be always angry

Dr Seuss and plastic potatoes are just metaphorical keys jangled in your face to distract from this https://t.co/cQ5cOLCyB4

Tim Ryan doesn’t usually make headlines in this way. He’s best known to most of us outside of Ohio as one of those dozen or so seemingly interchangeable white men who ran in the Democratic primary. In fact, the only thing I remember about him is that he came up with the worst slogan of the entire race. Remember this?

If we truly care about lifting up every voice and fighting on behalf of the issues that keep Americans up at night, let’s start by making our conversations civil and productive. #YouDontHaveToYell pic.twitter.com/OLsP1qeSze

That slogan came from a moment during one of the debates, when he tried to tone-police Bernie Sanders. He thought it was so good and relatable that he put it on merch.

That was laughable at the time because it was distinctly not relatable. During that exchange, Sanders was talking about the need to challenge the fossil fuel industry. It’s an issue that’s important—it’s literally essential to our survival. It’s worth yelling about. The fact that Ryan didn’t see that wasn’t exactly inspiring.

During his floor speech, Ryan was so fired-up that he was shouting his mask right off of his face. When you manage to get Tim “You Don’t Have to Yell” Ryan that worked up, you have to know you’ve done something horrible. And the GOP’s refusal to do anything to actually help Americans and their insistence on focusing on the most inane things imaginable definitely is that.