In Case You Missed It: Tim Burton’s Balloon at the Macy’s Thanksgiving Day Parade 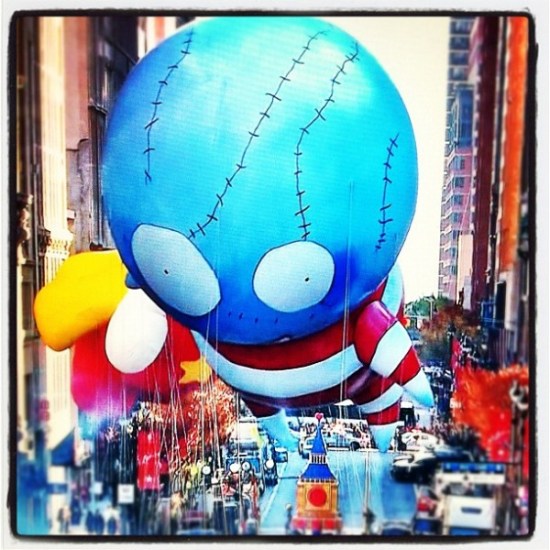 Yesterday, during the Macy’s Thanksgiving Day Parade, Tim Burton made his debut as “parade balloon designer” and introduced his original character B. Boy to the all-star lineup. B. Boy was part of an artists series called the Blue Sky Gallery, a regular part of the parade that gives artists and creators the opportunity to make a balloon that sits just outside of the mainstream “cast” of balloons. (Past artists have included Keith Haring and Takashi Murakami.) According to the Macy’s team, Burton was always very high on the list for this. B. Boy was first featured at the Museum of Modern Art last spring, and that’s when the parade team starting courting Burton. More pics, behind the scenes video, and B. Boy’s origin story after the jump!

The story of B. Boy was actually directly inspired by balloons; he’s made up of discarded party balloons from London’s Great Ormond Street Hospital. But because he looks so creepy to regular kids, he’s hid himself in a basement where he watches the Albert Lamorisse film The Red Balloon and dreams of flying away. Awwww, and now here is is! Flying through the blue sky of the Macy’s parade.

Burton was in attendance at the parade with his wife, Helena Bonham Carter, and one of their children. Here is a pic, along with some more views of B. Boy: 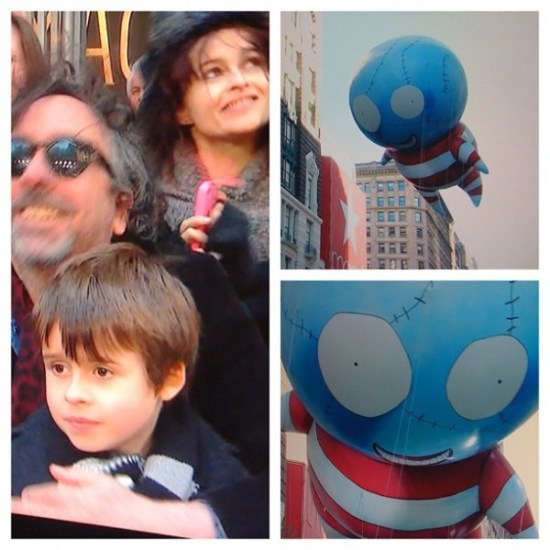 And here is something fun: This is a behind-the-scenes look at the team that walked B. Boy through midtown Manhattan. After some clowns, the B. Boy stuff starts at about 1:00.

And now, it’s time to watch A Nightmare Before Christmas. Well, again. After Halloween, the other perfect time to watch that movie.

Pics via Bleeding Cool, video via Kregore on YouTube, story via Gothamist, The Hollywood Reporter