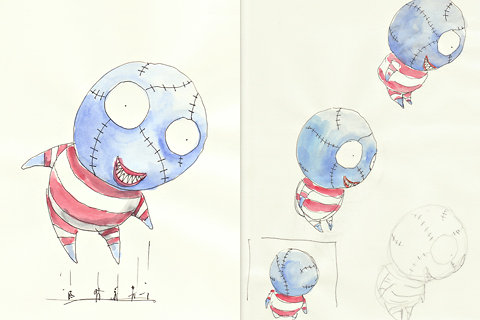 If you’re not American, this may come without any kind of context, but understand this: we have this holiday called Thanksgiving. Feel free to look it up and dig into it’s colonial origins, but the part of it that is most relevant to our discussion is that Macy’s, a national department store chain, throws a giant Thanksgiving parade in New York City. Famously, this parade has parade balloons. Usually of fictional characters, and in fact, getting your character as a balloon in the Macy’s Thanksgiving Day Parade is a measure of how your creation (or creations) has become a part of American culture.

And now you know why it’s cool that Tim Burton has designed a balloon for the 2011 Macy’s Thanksgiving Day Parade.

Whether you worship at the altar of Burton; think he’s an over-popular design worshipper whose been retelling the same story in the same striped pants for about a decade; or whether you never quite got used to him in the first place, it’s still pretty rad to see this as an endorsement of a little dark flavor in America’s otherwise quite cheery image of its own pop culture. 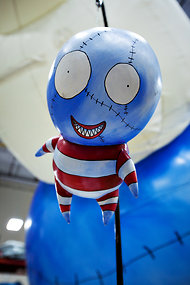 According to the New York Times:

B. was created, Frankenstein’s monster-style, from the leftover balloons used in children’s parties at the Great Ormond Street Hospital in London. Forbidden from playing with other children because of his jagged teeth and crazy-quilt stitching, B. retreated to a basement lair, where he obsesses over Albert Lamorisse’s film The Red Balloon and dreams that he, too, will be able to fly someday.

“There’s always been something about balloons,” Mr. Burton said, by way of explaining his B. Boy character. “You see them deflated and you see them floating. There’s something quite beautiful and tragic and sad and buoyant and happy, all at the same time.”

Indeed, that’s exactly the kind of contrasting adorability with terror and pathos with joy and sincerity with insincerity that makes the holidays so interesting.