Here Is a Spooktastic Glimpse at Tim Burton’s Dark Shadows 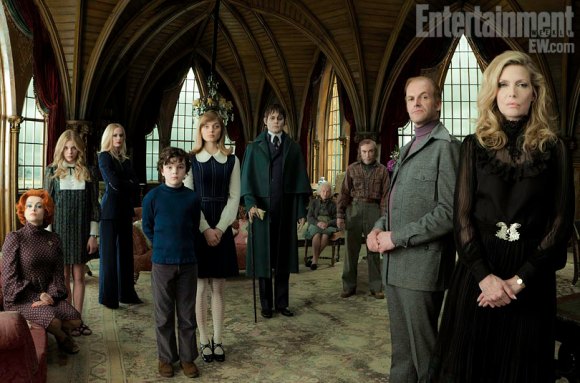 Entertainment Weekly has the first official look at Tim Burton‘s film adaptation of Dark Shadows, and it’s probably fair to say we’re a little bit less worried about Johnny Depp’s appearance now. A little bit. You might recall the earlier set pictures we posted in which Depp’s Barnabas Collins looks, well, like exactly how Tim Burton would interpret Barnabas Collins if he were a gothic, deranged mime-clown. Or Michael Jackson. (Wow, imagine if Tim Burton did a Michael Jackson biopic? Michael Jackson would probably have dug that sooooo much. Anyway … ) But here, the look is considerably more toned down, and according to EW, he is supposed to be taking on more of the “aged little boy look” of the original Barnabas, Jonathan Frid. You’ll also see Michelle Pfeiffer as Elizabeth Stoddard Collins, Helena Bonham Carter as Dr. Julia Hoffman, and Chloë Moretz as Carolyn Stoddard. EW has a comprehensive rundown of all the characters. Click through to get a bigger look at the pic.