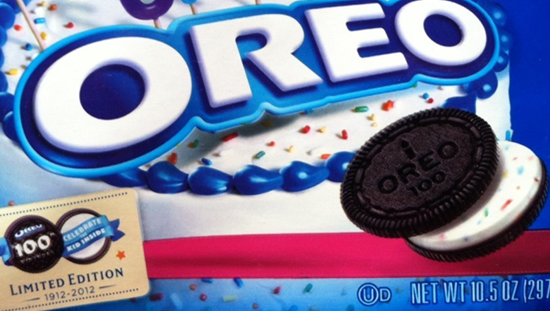 In the distant future, when alien archaeologists dig through Earth’s sediment and uncover traces of our glorious existence, they will inevitably unearth our most iconic product. They shall find the Oreo, the ubiquitous “chocolate sandwich cookies,” which was introduced on this day in 1912 by the National Biscuit Company (aka Nabisco). That’s right, Oreos are 101 years old. What did you do for its centenarian birthday last year?

The Oreo cookie has a long and storied history. First it was the Oreo Biscuit, then the Oreo Sandwich, then the Oreo Creme Sandwich, then the Oreo Chocolate Sandwich Cookie. Over the years, it’s seen innovations and architectural biscuitry like you wouldn’t believe. (Yes, I just made up the word biscuitry. It just sounds right.) There’s always been the two chocolate circles with magical white goodness, but there’s also been a ton of experimentation and specialized branding. Like Double Stuf (yes, with one “f”), Big Stuf, Mini, Triple Double, Triple Double Neapolitan. Even Football Oreos, for crying out loud.

Then there’s the unfathomable number of flavors and cookie seal designs, up to and including Banana Split Creme Oreos,  Dulce De Leche Oreos,  and the various holiday-themed incarnations. 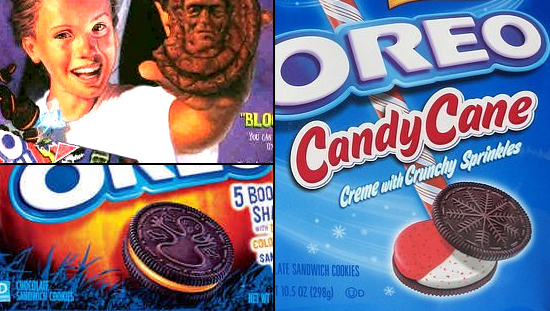 Not only does the Oreo lurk in our pop culture at all times — probably eyeing its pretentious second cousin, the Fig Newton — but it’s been making the rounds on the Internet lately for some excellent social media use. For example, the Oreo separator machine videos. The series shows off a bunch of machines that, as expected, separate the Oreo cookie from its creme. There’s been not one, not two, but three different videos so far. They’re all pretty great.

Then of course there was Super Bowl XLVII — which sportier people told me happened last month — when the Oreo people tweeted during the third quarter only minutes after the blackout, capitalizing on the infamous moment with a clever ad:

Power out? No problem. twitter.com/Oreo/status/29…

What’s next? Personally, I’m hoping they design the Mayan Calendar Oreo. How have they not already done this? 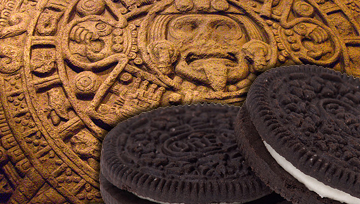 You can't tell me there isn't already some conspiracy there.