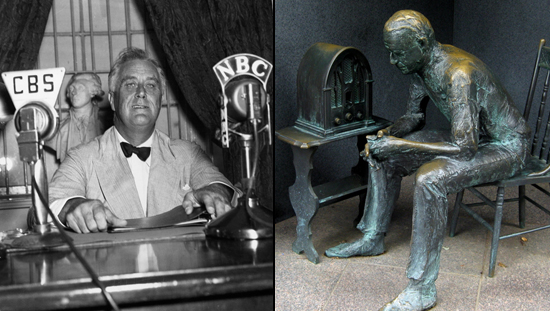 At the end of January, President Obama jumped onto Google Hangout for the first installment of his administration’s “chats” with the nation. You know, to show how hip he is, how down with the people. And you have to admit, whether you like Obama or not — it’s a cool idea for any world leader. Except it’s not really original, is it? Only the technology is! You see, on this day in 1933, only eight days into his presidency, President Franklin D. Roosevelt made his national radio debut with the first of his famous “fireside chats.”

Presidential speeches and addresses were propagated to the masses all the time, but what made FDR’s fireside chats different was their intimacy. They were broadcast via radio from the White House to the radios of every American who tuned in. Direct from President to citizen with no filter.

Roosevelt did this during a particularly turbulent time in American history. Yes, there are a mess of economic crises now — and it’s awful — but 1933 saw the Unites States deep in the Great Depression and between two World Wars. The routine spoken words right from the mouth of the nation’s leader was sure to provide some comfort, and FDR was naturally charismatic and had a cheerful-sounding voice. It worked.

The topic of FDR’s first fireside chat — there were thirty total — was banking, which sounds like it would be boring, except that it mattered to everyone at the time. Fear of financial insecurity was prevalent then — remember his “fear itself” speech? — and he wanted to explain in his own words why he’d ordered the nation’s banks to close to prevent mass withdrawals. He wanted everyone to understand that their money was needed in the banks for investment, “to keep the wheels of industry and agriculture turning around.”

With that set-up in mind, have a listen to the first broadcast:

Obama’s Hangouts actually allow for two-way communication. Google Plus takes the questions over the video via YouTube, and then users can vote on their favorites. FDR didn’t have that benefit — or drawback, depending on what he wanted to say — but it’s fun to imagine how differently we’d have seen the leaders of the past if we’d be able to interface with them.

Imagine if Abraham Lincoln had Skyped the Gettysburg Address.

(via History, images courtesy of uncgspecial and wallyg on Flickr)