TIFF Interview: Northern Soul, Can You Dig It?

Director Elaine Constantine takes us down the film's long road to release. 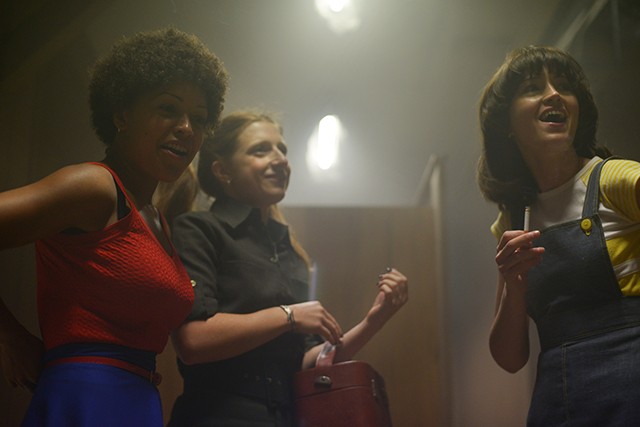 To call Elaine Constantine’s look at Northern England’s ’70s soul-scene a passion project is to almost redefine the term as we know it.

Based loosely on her own experiences growing up in Greater Manchester, the director has been developing, writing, and fighting a seemingly uphill battle to get Northern Soul made for the better part of the last fifteen years. Known largely for her vibrant, colorful, and youth-centric photography (as well as for last year’s standout New York Times Magazine “9 Kisses” shoot with Benedict Cumberbatch, Reese Witherspoon and other stars), Constantine looks well-poised to transfer her not-inconsiderable skills to the big screen with this retro-styled, BAFTA-nominated blast from the past.

Northern Soul follows the lives of two working class Lancashire lads — John and Matt — whose lives are forever-changed by their discovery of American soul music and its masses of enthusiastic and like-minded young fans. Starring newcomers Elliot James Langridge (John) and Josh Whitehouse (Matt), Soul is set for its international debut September 18th as part of the Toronto International Film Festival’s City to City programme, which this year spotlights London’s most talked about and promising talent and film.

Prior to Northern Soul‘s TIFF premiere, we had the opportunity for a sit-down with Constantine: the woman behind it all — fittingly situated among stacks of rare vinyls at Toronto’s Kops Records. Here’s what the passionate filmmaker had to say about the power of music and the Northern Soul movement, the kind of commitment it takes to tell such a personal story, and the joy of finally sharing that story with audiences:

Emma Badame (TMS): You’re known for portraying the vibrancy of youth and contemporary culture in a big way as part of your photography. What made you want to look back and highlight this moment in time – the ’60s and early ’70s phenomenon of Northern Soul – for your first feature film?

Elaine Constantine: As a thirteen or fourteen-year-old, I discovered Northern Soul and it changed my life. It made me want to travel outside my hometown and find more people that were into that kind of music. It expanded my horizons and I consequently stayed with that music throughout the rest of my life. I met my husband on the [Northern Soul] scene and all my friends — we all still go to all-nighters and weekenders, even in our middle age. (laughs) [Telling this story] is just something I’ve always wanted to do.

TMS: I believe you’ve actually been working on it for fifteen years, is that right?

Constantine: Yeah! It took fifteen years for it to even be greenlit. Then it was another two years on top of that before it got completed and released.

Constantine: Neither Elliott or Josh had ever really acted before…especially Josh. Josh had never even been on a film set before! I was looking for a kind of freshness and enthusiasm [for the project] too, because obviously we hadn’t been given the green light yet.

When I first met Elliott, I said: “This is going to be a journey. We’re trying to get off the ground as an independent film so this may take years. Are you up for the challenge?” From that moment, that conversation, to actually going on set to film was a gap of seven years.

Then I met Josh Whitehouse on a stills shoot three or four years after [I’d met Elliott]. That was quite a journey too because he didn’t know anything about acting, had no aspirations of actually being an actor. We had to teach him all sorts of things and then we did hours and hours and hours of workshopping with both of them to get them up-to-speed and also to educate them about the [Northern Soul] culture because it was a completely different way of existing. The kids they were portraying were on the poverty line, you know? Everyone had very low expectations of themselves because they all ended up working in the factories in the North of England, where I’m from. So kids then didn’t have the same sort of world view as kids do today. So we really had to make them understand. Not just about the music, not just about the dancing, but about the whole world that we grew up in.

TMS: Steve Coogan’s character does a great job of encapsulating that. As a teacher in John’s school, he flat out tells his students that they’ll never amount to anything. A very accurate sentiment of the day, especially in the north of England, I’d say.

Constantine: Exactly. All of my teachers, bar one, were basically abusive and damning towards us. There was never a kind of nurturing environment at all. It was always very much a “let’s just get through this phase” mentality, and get through it with as little grief as possible.

TMS: What was it then, about American soul music, that spoke to that generation? To you?

Constantine: I think there’s always been a tradition of kids in the UK getting into authentic American music. At a certain time, music in the UK was being controlled by the BBC and the tunes [they were broadcasting] were covers. They weren’t the real deal at all. So when Chuck Berry came out, people were just blown away. Since a big proportion of music [of the time] was a kind of homogenized version by all of these cover acts, hearing authentic black American voices singing these heartfelt lyrics felt like the real deal and it’s what really hit me. I believed the singer when he’d sing about love or loss. I could step into that feeling when I was dancing and have a moment with that singer, do you know what I mean?

Whereas the pop stuff or the rock stuff that we heard in the UK…I couldn’t identify with it at all. It just didn’t touch me. The kind of sincerity of the voice and sincerity of the lyrics keyed into some emotion that maybe we were lacking. We weren’t an emotional culture. We weren’t a culture that touched each other or said “well done” or anything like that. It was all just a kind of “get on and do it” attitude, as part of a very strong instilled work ethic. So the music served as a real massive escape for us.

TMS: Do you remember which Northern Soul tune you had that first emotional connection with?

Constantine: I reckon it was probably an Edwin Starr record. Maybe “Backstreet” or something like that? Something made me sit up and go “wow!” Mostly because the lyrics actually spoke to me…to us. We were from the backstreets. Where I grew up and where all of the people I knew grew up, we all lived in what were called backstreet houses. They were the lowest of the low. So if you came from a backstreet house, you were clearly poor. So when I heard “Backstreet”, I thought it was cool. We were finally cool…actually cool.

TMS: So after having had this film as a part of your life for so many years, how does it feel to finally share it with audiences both in the UK and internationally?

Constantine: It was incredible. Just to get distribution! We didn’t get any public funding, we didn’t get into any festivals, globally. This is our first festival, which is amazing considering we [finished filming] three years ago. We got turned down from everything. Genuinely. Every single thing. There didn’t seem to be the opportunities that there were supposed to be, you know? So the film ended up reflecting the lack of exposure the Northern Soul artists got in America.

Distributors thought that the film was so niche — too niche — that it was a big, big risk. But we eventually got a deal and it was for a very small release (last November) in around ten to fourteen cinemas in the UK. But then it developed a massive following and those people demanded it, essentially, in other cinemas.People emailed all of their local, independent cinemas because they weren’t prepared or happy to have it just on VOD or DVD. They wanted to see it in a cinema! To have an experience like the one they’d get on a dance floor.  So we went from our initial expectation of ten screens to over 125 screens in just two weeks. Then it went on to become a box office top ten and [even] got a BAFTA nomination! (laughs)

TMS: So after fifteen years of blood, sweat and tears, how did you feel hearing that announced?

Emma Badame is a Londoner by heart and a Canadian by circumstance. Currently based in Toronto, the unapologetic film, television, and theatre nerd finds time between bouts of fangirling on Twitter, Instagram and Facebook to be a digital content producer and film journo, writing for Cineplex.com, Cineplex Magazine, MuchMusic.com, CTV.ca and more.