Cartoon Network’s ThunderCats reboot won’t grace our television screens until late July, but, there has been an epidemic of ThunderCats mania clawing its way through geekdom. With a sneak-peek of character designs surfacing online, an impressive list of the show’s voice actors popping up and a very rare appearance by everyone’s favorite nunchuck-wielding ThunderCat Panthro performing his cabaret number on Late Night with Jimmy Fallon this week, people can’t seem to wait for this memorable 80s cartoon to make its long overdue comeback.

Now, reboots of classic cartoon shows usually fail due to poor execution or the fact that the original should never have been tampered with, but this time, things seem to be different. Art director Dan Norton has revealed to IGN that the show will be intent on bringing back some classic characters like the Berbils, but Norton informs us that there are a lot more places to be discovered on the vast terrain of Third Earth, “There’s one place that we do explore in this new version where Lion-O comes into contact with new races and you’ll see that there are a lot of inhabitants of Third Earth.”

If you remember Mumm-Ra’s group of bumbling mutant lackeys, we rarely got to see any diversity among their kind since it was always Slythe, Monkian, Vulture-Man, Jackal-Man and — to a lesser extent — Ratar-O in the spotlight. But Norton assures us that there will be more elaborate species,

“We definitely do see several more animal types. Not to spoil anything, but there is a lot more of the animal kingdom represented. From the old show, as far as mutants were concerned, you had the jackals and the monkeys and the lizard men, but we made sure in this go-around to design a herd. With different monkey men and jackals. You’re going to see a population of these guys and they’re not going to be the stock characters. It won’t look like they hit the cloning device.” 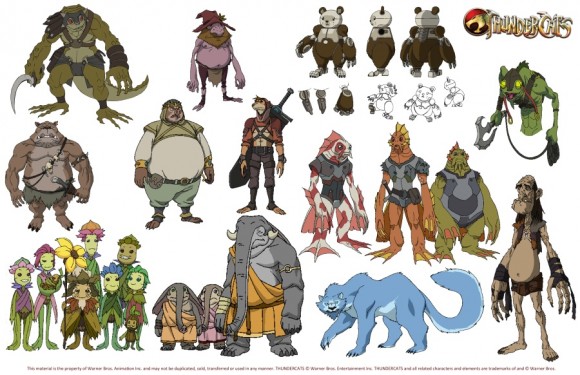 Even the ThunderCats themselves have undergone a re-design, but in a way that works. When compared to their ’80s counterparts, characters like Cheetara and WilyKit are looking more native in their garments, and, shall we say, clothed (sorry, boys). Back in March, MTV’s Splash Page revealed some exciting line-ups regarding who will be voicing whom: the new Lion-O looks younger and less ripped, but the voice actor is none other than Will Friedle (that’s Boy Meet’s World’s Eric Matthews) who has also lent his voice to characters on Disney’s Kim Possible and Batman Beyond; Kevin Michael Richardson of The Cleveland Show will voice Panthro and Robin Atkin Downes will voice Mumm-Ra the Ever-Living, “Turn this decayed form into –” Sorry, got a little excited. Fans of the original will find solace in the fact that Larry Kenney — the original voice of Lion-O — will be part of the cast, but as Lion-O’s father Claudius.

Just in case you haven’t seen the trailer yet of what’s to come this summer, make sure to check it out below.