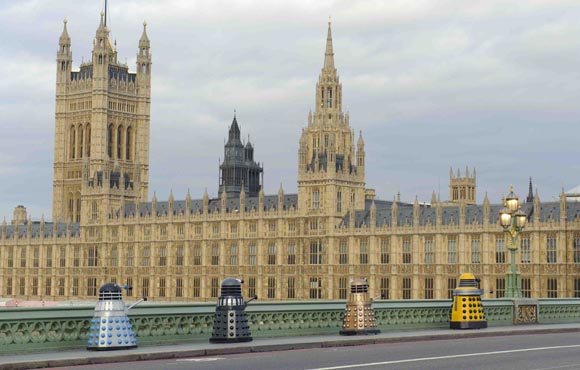 Love Doctor Who? Want to celebrate its 50th anniversary? You have until November to figure out how to get to London. Plus, what are Rory and the Fifth Doctor doing?

The Doctor Who 50th Celebration Weekend will be held at the ExCeL centre in London. The affair will begin Friday, November 22 and last for three days. There will be space for 15,000 Whovians to attend.

“Saturday November 23, 2013 will mark 50 years to the day since the Doctor first appeared on British TV screens and since then his global appeal has continued to grow, with viewers across generations in over 200 territories around the world and over 3 million Facebook fans,” writes the BBC. “More details about the Doctor Who 50th Celebration Weekend, including guests, intinerary, ticket prices and booking information will be revealed soon, alongside a host of other surprises. Fans should sign up to the doctorwho.tv newsletter to be the first to hear about plans for the celebration.”

Last year saw a two day Doctor Who convention in Cardiff but this one is bound to be bigger and better. Do you think 15,000 tickets will be enough?

Meanwhile, two more Who alums have commented on their involvement in the anniversary. “I’m so busy at the moment that I don’t know if I’d be able to,” said Arthur Darvill, speaking to Digital Spy. “But I’m very loyal to Doctor Who – I saw Steven Moffat recently and I think he’s brilliant. He’s one of those people that if he ever asked me to do anything, I’d do it.”

And Fifth Doctor Peter Davison did an interview with Independents Arts Blog. “I suppose I’m attending some functions,” he said. “I’m involved in some Big Finish 50th anniversary specials. Apart from that I don’t know. I do have a meeting with the producer of Doctor Who just to talk about events, things at Bafta. There’s a big celebration on the weekend when the series went out originally which strangely falls on the same weekend, that’s as far as I know.”

(via Doctor Who News photo by Matt Crossick)