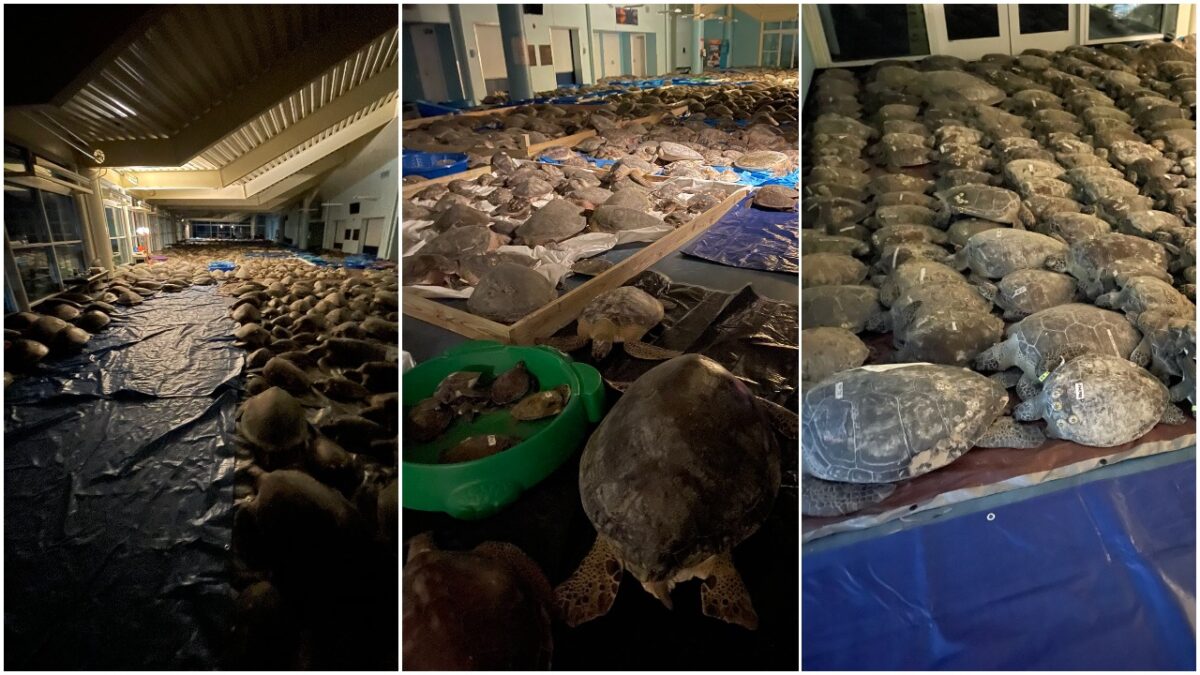 Frigid temperatures and terrible weather have made things very hard for humans in Texas not named Ted Cruz, but the conditions are as tough for turtles, if not worse. Yet some of the humans who are coping with their own crises are doing amazing work to save thousands of stranded, very cold turtles from the Tean waters, mainly through the organization Sea Turtle Inc located on South Padre Island. That means convention centers full of turtles, with more arriving every day.

The gulf waters off the coast of Texas, as well as lagoons more inland, are filled with sea turtles, but these cold-blooded animals can’t cope with temperatures under 50 degrees Fahrenheit. When it gets that cold they go into a state called “cold-stun” which means they are awake but can’t move. This is obviously very bad and dangerous for these animals, so volunteers have been gathering the stunned turtles to bring them to facilities where they can be kept safe and slightly warmer.

And thanks to a viral Twitter thread, the good work of Sea Turtle Inc to save the animals has received major attention.

My mom is retired, & she spends her winters volunteering at a sea turtle rescue center in south Texas. The cold snap is stunning the local turtles & they’re doing a lot of rescues. She sent me this photo today of the back of her Subaru. It’s *literally* turtles all the way down. pic.twitter.com/xaDRNjLDoQ

A Subaru full of turtles was just the beginning. Volunteers with Sea Turtle Inc took in thousands of turtles, filling their facility with over 500 animals and necessitating the need to find other places to keep them and gradually raise their temperatures back up. They received help there in the form of the local convention center and a SpaceX launch site, but like much of Texas, Sea Turtle Inc was housing turtles and trying to keep them safe with intermittent or no electricity.

They ran out of space at the rescue center, so the local convention center opened its doors to turtle storage. This video was from yesterday afternoon. By the time my mom sent it to me, there were so many more that she said, “there is no empty floor space tonight.” pic.twitter.com/g6Gw7dfIOQ

The folks saving these animals are working under incredible circumstances. Loss of power for the Sea Turtle Inc facility means they can’t easily warm cold-stunned turtles up or keep the turtles currently living there, many undergoing medical treatments, safe. It’s scary.

Executive Director Wendy Knight spoke to NPR yesterday, describing this as “the Armageddon of all cold stuns.” Sea Turtle Inc prepares for this kind of thing annually, but they’ve never faced a cold-stun on this scale. Or with no power. “We have exacerbated a once-in-a-few-decade experience by a holdback of the power grid and a holdback of our electric support,” Knight said.

What’s worse is that according to Knight on a video from Instagram yesterday, the holdback on electricity has damaged their heating systems for their tanks, and those will cost thousands of dollars to replace. These tanks and the work of organizations like Sea Turtle Inc is vital, but according to Knight, talking to the Washington Post, “A cold stun like this could have the potential to wipe out decades of hard work, and we’re going through it with no power and a unique, more catastrophic challenge to our efforts.”

The turtles are not the only animals suffering in this extreme weather. At a primate center near San Antonio, with the power out, monkeys and lemurs were freezing and at least one Chimpanzee froze to death. It’s all extremely tragic and even more so because the power failures were due in part to human arrogance and error, as is the climate change that is behind this extreme weather. And these turtle species are all threatened or endangered as well.

Humans helped make this disaster, but humans are also helping save animals from it. If you want to help you can donate directly to Sea Turtle Inc and help save these beautiful animals with some actual … turtle power.