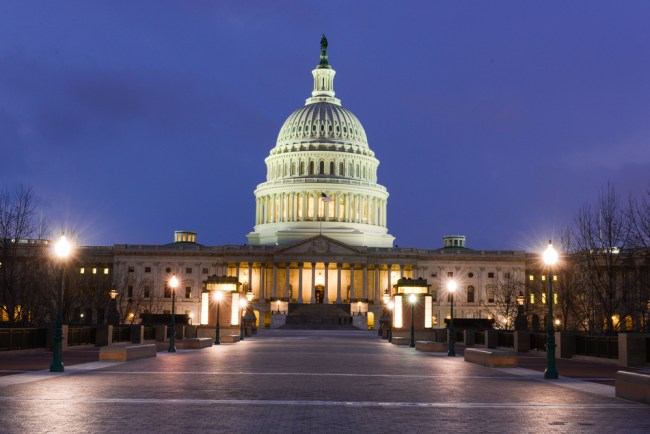 Last week we talked about the new rules proposed by House Republicans, designed to ban photos and video from the floor of Congress from being shared with the American people. If you thought this idea was a terrifying way to do away transparency, well, you’re not wrong. But surprise! Things just got a whole lot more terrifying and WAY less transparent.

Late Monday night, with no prior notice, House Republicans met in a secret conference to vote on a plan that would essentially do away with the Office of Congressional Ethics, the independent ethics office set up to investigate corruption in Congress. The vote was reportedly designed by a number of Republicans who felt they had been wrongfully targeted by the office. Like, for instance, Texas Republican Blake Farenthold, who was accused of sexually harassing a  former staffer.) Because nothing says “ethics” like clandestine late-night meetings held on national holidays, organized by the very people accused of being unethical, right?

Now, while writing this, the GOP withdrew their plan before the full House vote, scheduled for Tuesday afternoon. The loud and severe backlash (what did they expect?!) seems to have caused them to reverse their plan, which is fantastic news. (Good job everyone who called their Congressperson!) But it’s still terrifying, because at a time when we have a president ready to enter office with unprecedented conflicts of interest, with both houses of Congress controlled by Republicans, this most definitely won’t be the last you hear of this sort of plan. They’re trying to keep our eyes and ears off of them, banning photos and video and holding secret late-night meetings. It’s important to know what our government is trying to push through.

What they had proposed wouldn’t have dismantled the Office of Congressional Ethics entirely, but rather would have established a new Office of Congressional Complaint Review, which would have acted as a sort of go-between, deciding which “complaints” make their way to the O.C.E. The O.C.E., by the way, was set up in 2008 because the internal House Ethics Committee was criticized for not adequately pursuing issues of corruption. Any guesses as to who would have been overseeing the new Complaint Review Office? If you guessed the House Ethics Committee—i.e. the investigated lawmakers themselves—good job, you win! (Sorry, your prize is a potentially dangerously corrupt government, though.)

Oh, and just to round out the horror, in case there was any hope left as to whether this might have been misunderstood and maybe these Republicans actually wanted to preserve any sort of ethical oversight, the new office wouldn’t have been able to take any anonymous tips, and they wouldn’t make their findings public.

“Republicans claim they want to ‘drain the swamp,’ but the night before the new Congress gets sworn in, the House G.O.P. has eliminated the only independent ethics oversight of their actions,” Ms. Pelosi said in a statement on Monday night. “Evidently, ethics are the first casualty of the new Republican Congress.”

As did Elizabeth Warren, as always:

And now the @HouseGOP is gutting its ethics office in the middle of the night – hours before the new Congress is sworn in.

Tell us, @GOP: Who, exactly, thinks that the problem with Washington is that we have too many rules requiring the gov to act ethically?

For his part, even Trump criticized the proposal… sort of… well, not really.

With all that Congress has to work on, do they really have to make the weakening of the Independent Ethics Watchdog, as unfair as it

……..may be, their number one act and priority. Focus on tax reform, healthcare and so many other things of far greater importance! #DTS

All Trump actually criticized there was the timing. He still called the O.C.E. (whose name he apparently didn’t bother to learn) “unfair.”

Luckily, due to the backlash, these new rules have been taken off the table. But House Republicans just let us know what their ideal Congress would look like. No oversight, no transparency, no accountability. This is a good reminder that we should all be keeping an eye on our government, as is our right.

And, sure, while you’re at it, maybe make sure your passport is up to date.

(via NYT, image via Shutterstock)