This K’Nex Pinball Machine is Made of Awesome 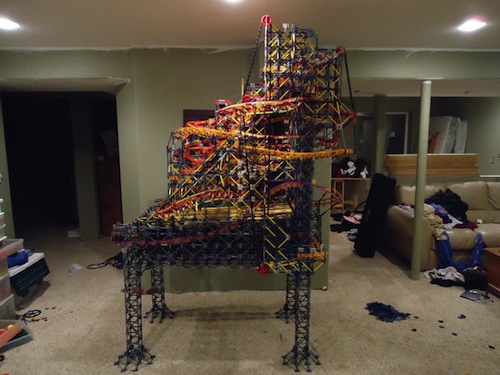 K’Nex are an incredible set of building toys. Over the years we’ve seen people build amazing, surprisingly functional devices with just the stuff that comes in the box. Or a lot of boxes: It takes a lot of pieces to build a YouTube-worthy ball machine. Case in point, University of Colorado student Andrew Locke probably used thousands upon thousands of pieces when he built himself a working pinball machine entirely out K’Nex.

Building a full-sized machine with working flippers and a crazy path for the ball would have been amazing enough, but Locke’s machine is way more intense than that. When you put a ball into one of the holes at the base of board, the K’Nex pinball machine employs a series of motorized lifts to bring the ball from its starting position up to the top of the machine, where it builds speed on a roller-coaster ride down into play. The base has three holes, each with its own corresponding path.

In the larger scheme of things, the machine doesn’t seem like it would hold one’s attention for too long. It’s a very simple pinball experience without bumpers or whistles. There are some things you can’t make only using K’Nex and, to be fair, I think Mr. Locke is already pushing the medium to its limits. If you want to see the machine in action, check out the video below. If you want even more, there are tons of pictures of the inner working of the machine at Locke’s Instructables page.

Related to Your interests