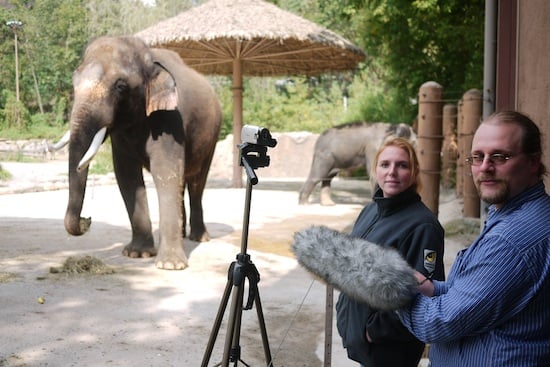 I mean, not speak it like terribly well or anything, but still! This is Koshik, an elephant at a South Korean theme park who has picked up a couple words of korean language that he can vocalize to his trainers by sticking his trunk in his mouth. Researchers have just finished a two year study of the animal, trying to understand how it came to imitate human language so accurately. Well, accurately for an elephant anyway. Don’t take our word for it, though — listen for yourself in the following video.

There have been reports of Koshik, a 20 year old Asian elephant, speaking korean since 20006. The report published today in the journal Current Biology is the first peer-reviewed evidence to demonstrate that Koshik is mimicking human speech — and doing so quite well. An international team of researchers studying Koshik found that native Korean speakers could understand what was being said when a tape of the elephant was played for them. That’s an impressive feat because of how structurally different human and elephant vocalizations usually are, and…well, you know what, I don’t think I have to explain why an elephant talking is amazing. You’re smart folks, you get that.

Elephants have been heard to imitate sounds before, like the noise of trucks or the calls of other elephants, but researchers say this is the first time that an elephant has been found mimicking human speech. According to the study published today, Koshik knows five words in Korean — “anja” (“sit down”), “aniya” (“no”), “nuo” (“lie down”), and “choah” (“good”) and “annyong,” which any fan of the Bluth family can tell you means “hello.”

Koshik doesn’t seem to have an actual understanding of the word meanings, researchers say, and it’s not clear why he picked up human speech, though the fact that he was isolated from other elephants and socialized only with his human keepers as a juvenile could explain it. It also puts a really sad point to this story, which is ultimately about an elephant stolen from his family at a young age and desperately trying to make himself heard in a world that can never accept or understand him. So, sorry about that, everyone.