Things We Saw Today: Dress Your Chewbaccas in Lederhosen and Culottes 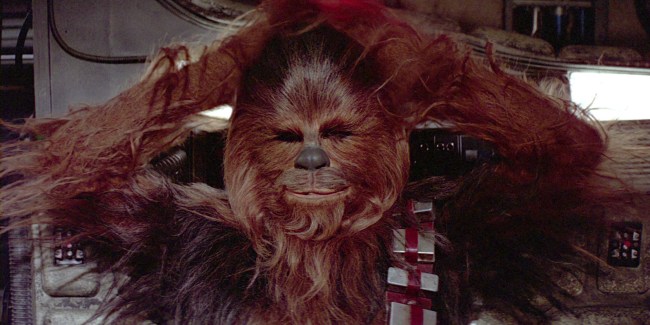 Few celebrities are as good at Twitter as Mark Hamill. The erstwhile Luke Skywalker is a delightful presence on the cursed bird site, where he shares Star Wars memes, dunks on conservatives, and playfully trolls his own fandom. The man is a delight and a national treasure.

Hamill also offers us a window into the most bizarre and random Star Wars arcana, including this studio note that almost changed the character design of Chewbacca. Responding to a tweet from Joseph Gordon-Levitt, Hamill shared that the studio execs wanted to put clothes on our favorite Wookiee:

FUN FACT: Very early in the shooting of #SW studio execs expressed deep concern that Chewie didn't wear any pants & suggested he wear a pair of lederhosen. That they would focus on this amidst all the grotesque elements in the script made us laugh (& a bit worried)🙄 #TrueStory https://t.co/BCNhWDrwdl

Hamill tweeted, “FUN FACT: Very early in the shooting of #SW studio execs expressed deep concern that Chewie didn’t wear any pants & suggested he wear a pair of lederhosen. That they would focus on this amidst all the grotesque elements in the script made us laugh (& a bit worried.)”.

Chewbacca in lederhosen. Let that sink in for a minute. Hamill had previously discussed studios concern with Chewbacca’s nakedness in an interview with the Associated Press, saying “I remember the memos from 20th Century Fox, ‘Can you put a pair of lederhosen on the Wookiee?’ All they could think of was, ‘This character has no pants on!’ This went back and forth. They did sketches of him in culottes and baggy shorts.”

I, for one, would be delighted if Chewbacca dressed like a middle-aged woman from the Midwest. I mean, Barb and Star and Chewy Go To Vista Del Mar? Shut up and take my money.

The internet does not disappoint: pic.twitter.com/PXQ8cfb8BJ

I love wandering into independent bookstores and discovering new voices and new authors. So on Independent Bookstore Day, I wanted to talk with some of the folks who help support authors and nourish our communities. pic.twitter.com/H8SqOV0nAa