Things We Saw Today: Canuck the Crow Is the Most Badass Bird Around

Canuck will cut you if you cross him. 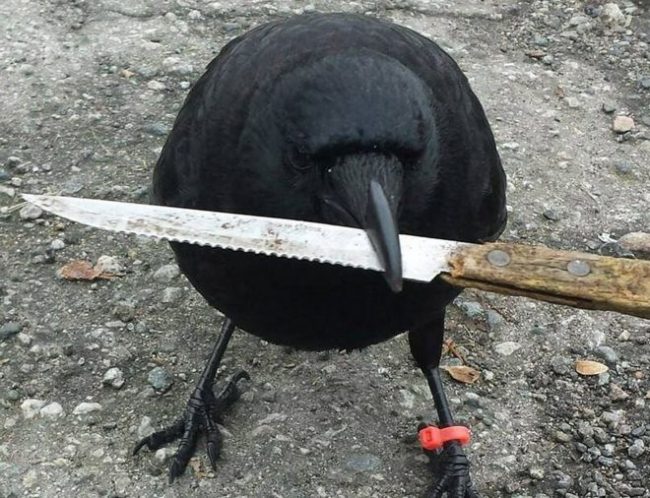 Infamous Vancouver-area corvid Canuck is up to mischief again. This time, he attacked a postal worker and completely halted the delivery of mail to one neighborhood for months. Canuck has made headlines before for defying societal bird norms with acts like riding the SkyTrain and messing up crime scenes.

Without a doubt, Canuck is the coolest bird on the block. In May 2016 he gained notoriety for stealing a blade from a the scene of a crime, and is well-known to the police for grabbing a computer button straight out of a patrol car. When not living life on the edge of the law, Canuck hops on the Vancouver metro system and swoops down to grab anything shiny. We know that so much badassery has been perpetrated by a single bird because Canuck wears a red tag on one leg, which locals joke is his ankle monitor.

Mail service has finally resumed. But the man who runs the wonderful Facebook group Canuck and I, Shawn Bergman, reported that threats were made to Canuck’s safety because of the mail carrier incident, and that the Canada Post was unhelpful in response to suggestions on how to resolve the situation. Bergman also says that Canuck only attacked because it was nesting season, and the corvid—which are as territorial as they are crafty and brilliant—was protecting his next. Anyway, hopefully the most recent Canuck drama has been resolved, because this bird is my very favorite bird on earth. I’ve been laughing at the above picture for at least the last thirty minutes and I show no signs of stopping. (via Global News, image: Canuck and I on Facebook)

What you spot with your eyes, you murder of Mary Suevians?