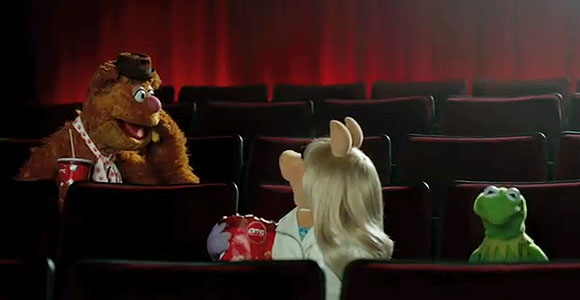 We’ve brought you stories before about texting in movie theaters and musical venues but now, some major theater executives have put their hat into the ring. The boxing analogy fits here, you see, because these executives are considering allowing cell phone use in theaters and a lot of moviegoers are not happy about it.

A panel on industry issues was held at CinemaCon in Las Vegas this week. According to Deadline during the talk, the subject of cell phone use in theaters was broached.

Sony Pictures Entertainment’s Jeff Blake kicked off the discussion saying that 20 years ago “kids would come every week” to the movies. But no more. “I’m concerned that the moviegoing experience isn’t just for baby boomers.” Regal Entertainment CEO Amy Miles says that her chain currently discourages cell phone use “but if we had a movie that appealed to a younger demographic, we could test some of these concepts.” For example, she says the chain talked about being more flexible about cell phone use at some screens that showed 21 Jump Street. “You’re trying to figure out if there’s something you can offer in the theater that I would not find appealing but my 18-year-old son” might.

IMAX’s Greg Foster agreed. His “17-year-old son ‘constantly has his phone with him,’ he says. ‘We want them to pay $12 to $14 to come into an auditorium and watch a movie. But they’ve become accustomed to controlling their own existence.’ Banning cell phone use may make them ‘feel a little handcuffed.'”

Is this where we’re going? Will those of us who despise cell phone use in movie theaters be pushed aside in favor of the younger crowd who can’t be without their mobile devices? /Film points out that smokers adjusted just fine to not being able to smoke on airplanes, etc. and that kids should be able to deal with it. Don’t worry though, there was a voice of reason on the panel.

Tim League, CEO of Alamo Drafthouse — a small chain that makes a point of throwing out customers who talk or text during a film. “Over my dead body will I introduce texting into the movie theater,” he says. “I love the idea of playing around with a new concept. But that is the scourge of our industry. … It’s our job to understand that this is a sacred space and we have to teach manners.” He says it should be “magical” to come to the cinema. But Miles shot back that “one person’s opinion of magical isn’t the other’s.”

Does texting or talking on a phone make for a magical experience? I can’t possibly see how but I suppose there are some that enjoy it. Perhaps we need to install sound-proof seating areas in theaters for these individuals. “I understand that theater chains feel increased pressure to compete against TV, the internet, games, and other entertainments,” writes /Film. “But the answer is not to allow behavior that will make the experience worse for other people. Cell phone use makes things worse, period.”  And really, are younger moviegoers really not going to go see the newest blockbuster on opening weekend because they wouldn’t be allowed to text during it? Doubtful.

Regardless, I’m with Miss Piggy on this one.