Texting Will Be Allowed At New Washington State Concert Hall 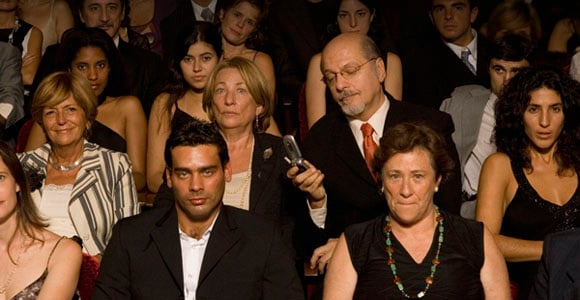 Are you one of those people who text no matter where you are? Even darkened theaters? News flash: people hate you. Ok, maybe I just hate you, but I don’t think I’m alone. Movie theater cell phone users are the bane of my existence but now, one soon-to-be-contructed Washington State concert hall is saying it’s totally OK to text during performances. Hit the jump to find out why they’d have such a policy.

The New York Times broke the story about the Tateuchi Center in Bellevue, Washington. The theater is not just allowing their patrons to text during shows, they are actually encouraging them to update Twitter and Facebook. And well, therein lies your answer – social networking.

“This is the wave of the future for the people we worry about attracting,” said John Haynes, the theater’s executive director. “Simply forbidding it and embarrassing people is not the way to go. So we are wiring the building in anticipation of finding ways to make it work over time.”

Some theaters put a notice outside the doors or on the screen to remind customers to turn off or silence their cell phones, others, like the Alamo Drafthouse, will eject you from the building for not complying.

The Tateuchi won’t be opening until 2014 but will have “a 2,000-seat concert hall and a 250-seat cabaret, and plans to present theater, classical music, jazz and pop. To improve cell signals within, it will have a 12- to 14-foot antenna.” The NY Times says they plan to “have a standing policy of allowing nondisruptive cell use during performances, [Haynes] said, and will perhaps distribute small screens to patrons to place on their phones and dim the light. Artists booked there can request no phone use.”

And that’s certainly a big factor to consider, the artists performing at the hall may not be as progressive as the owners, not to mention concerns over copywritten material being recorded.

What are your thoughts? Do you think the gimmick will work or rather alienate those who go to the show for the performance?