The truth is out there and it sucks.

No excuse at this point. None. https://t.co/A2GtOhEsER

From the Department of What the Actual Fresh Hell Is This, news comes that season 11 of the refreshed X-Files has finalized its writer’s room. Considerably less refreshing is that the females on staff amount to exactly none.

IndieWire reports on series creator Chris Carter’s new staff and it’s … bleak. Like, are they casting a scene in 1960’s Mad Men bleak. (Even Mad Men allowed Peggy into the ad writer’s room, and she killed it.) IndieWire channels the frustration that I felt upon hearing this news:

“Three new writers have been selected to help complete the 10 episodes ordered by Fox earlier this year. And the new kids in town are Gabe Rotter, Benjamin Van Allen, and Brad Follmer — the first two were writers’ assistants on Seasons 9 and 10, while Follmer was Carter’s personal assistant during the show’s original run.

That’s right: In the year 2017, a major broadcast drama is going with an all-male writers’ room. It speaks to the power Carter has at Fox — Rotter, Van Allen and Follmer have a total of one previous writing credit amongst the three of them — but these assistants clearly forged a connection with their former boss.”

In addition to the new crop of anointed gentlemen who share one writing credit between them, the other scribes joining Carter’s crew are old X-Files hands Darin Morgan, Glen Morgan, and James Wong. Darin Morgan has long been a particular fan favorite for writing excellent episodes like “Clyde Bruckman’s Final Repose,” which won an Emmy, and as an X-Files fan I’m always glad to see his name.

All three, however, were also involved in the 10th season, which … didn’t exactly thrill and amaze audiences. Yet rather than shake things up, it appears that for this go-round, Chris Carter hired people he knows from past seasons, two former writer’s assistants and his personal assistant. And while they were staffing, it didn’t either didn’t occur—or matter—to anyone on the creative side to include a single lady in the conspiracy.

Listen, we’re not asking for much. I’m not demanding an all-female staff or a female-majority staff or anything beyond even an attempt at more diverse representation in that room. One woman—one!—would seem like a big deal in comparison to what has been put together. And when you consider that The X-Files stars actual Goddess Gillian Anderson as one of the most iconic and strong female characters to ever grace the TV screen, this move feels less like an oversight and more like a direct affront. It’s kind of shocking in its shortsightedness. Did they expect no one to notice?

Dana Scully, who labored in a primarily male-dominated environment, might not be surprised. Anderson herself, who was initially offered half co-star David Duchovny’s pay to return to The X-Files revival, is no stranger to the sexism that plagues Hollywood and apparently this show in particular. She pushed back until she received equal pay, because Gillian Anderson is a force of nature to be admired and worshipped. But I’ll never forget her account of the early X-Files days to The Daily Beast:

The studio initially required Anderson to stand a few feet behind her male partner on camera, careful never to step side-by-side with him. And it took three years before Anderson finally closed the wage gap between her pay and Duchovny’s, having become fed up with accepting less than “equal pay for equal work.”

“I can only imagine that at the beginning, they wanted me to be the sidekick,” Anderson says of Fox’s curious no-equal-footing rule. “Or that, somehow, maybe it was enough of a change just to see a woman having this kind of intellectual repartee with a man on camera, and surely the audience couldn’t deal with actually seeing them walk side by side!”

Yes, that’s right, folks who discount the presence of a gender pay and equality gap: Dana Scully was not initially allowed to walk side-by-side with Fox Mulder. Pardon me, I need a moment. 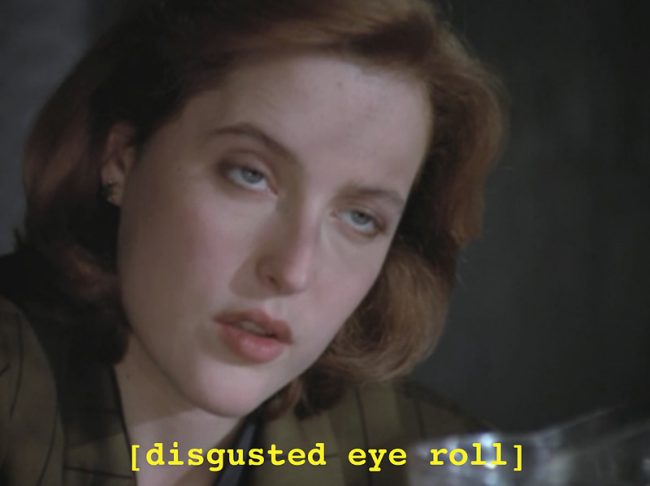 In terms of Carter’s writing room, the situation feels all too familiar. There’s a form of subtle sexism that I—and many other women I know—have encountered that is insidious particularly because it is not always intentional. While we can rage against obvious idiocy like not hiring any female writers, unequal pay and making Scully skulk in Mulder’s shadow, we need to address the Boys’ Club mentality that continues to dominate many industries. These are instances where men advance particularly because they are known and friendly to powerful men in ways that women are not invited to be.

For example, in past jobs I have held, some men would receive the best tips to chase for stories or choice assignments from their male superiors, because they were pals and already chatting. It wasn’t an evil plot to undermine women writers—it just happened naturally for those involved because of their proximity. Or, since a man was known to his boss because they frequently went out for beers together, that man got a promotion over his female co-workers. He was personally vetted and the women were not.

I could tell a thousand stories in this vein—show you dozens of men that I watched get boosted past women because they were easily recognizable to the men in charge. These cases don’t indicate that male bosses hate women or seek to discriminate against them. But the greater social ease afforded to men who work together gave the guys in junior positions a visibility that their female equals did not have. This is an ongoing problem that needs to be actively acknowledged and addressed by people in positions of power.

That’s the primary issue that I have with the reports of Carter’s writing room. I don’t begrudge the men who likely worked hard as writer’s assistants, and as Carter’s personal assistant, and earned a long-desired promotion. But to suggest that these particular men were more qualified and able than all the other female writers in Hollywood who would have jumped at the chance to pen some X-Files just cannot be the case.

Instead, it appears that Carter looked around at who was known to him and boosted them up. He’s entitled to do so. But at the very least, if they were the absolute best in Carter’s mind for the positions, more space should have been made alongside them for seasoned female TV writers and also fresh new aspiring women ready to tell X-Files stories. This doesn’t seem like an unreasonable balance to request in 2017.

I’m particularly upset about this blatant foolishness from The X-Files because women have been the driving force in its devoted fan community from the beginning, and a huge reason why the show remained popular enough to come back from the dead in the first place. When I was 12 I read many female-written X-Files fanfictions good enough to put any aired episode to shame. Maybe Chris Carter and Co. should have been reading those instead of the years they spent sending cease and desist letters and disparaging fan efforts.

This is all so disappointing and exhausting. Wake me up when The X-Files catches up to the modern day. I’ll await your call.