Watch Gillian Anderson as David Bowie in American Gods, This Is Not a Drill

Literally everything I have ever wanted.

Because they love us, American Gods just broke up a humdrum week with the finest of gifts: an advance clip of my own personal goddess Gillian Anderson embodying my own personal idol, David Bowie. YOU GUYS.

Sayeth the deities of Starz PR: “Gillian Anderson stars as the New God Media in the critically acclaimed series ‘American Gods.’ Media assumes whatever form will deliver her message most effectively and is often personified by iconic celebrities.”

We’ve already seen Gillian’s Media appear to Shadow on TV as Lucy Ricardo, but this is just next-level. DAVID FREAKIN BOWIE, MY FRIENDS. (I miss him very much, and this also works as a sly yet touching sort of tribute—I think Bowie would approve.)

According to the press release, we’ll also have the opportunity to see Gillian as Judy Garland and Marilyn Monroe in the future. And since the show’s been renewed for a second season, who knows what under what guises she might one day appear?

In the scene above from this Sunday’s episode, Media confronts Technical Boy (Bruce Langley), the young New God punk who kicked off the season by having his goons attack and try to lynch Shadow (Ricky Whittle). Media has a good deal more crafty grace, and she’s been sent on behalf of Mr. World (Crispin Glover) to extract an apology from Technical Boy.

But these are all MERE TECHNICALITIES, because goddamned Gillian Anderson is dressed to a superglam T as David Bowie, complete with English accent, backing track and reference to pretty things. Listen, I’ve been obsessed with both Gillian Anderson and David Bowie since I was 12, and my brain is having trouble handling this much of a dream come true. Please excuse me while I watch this clip on a loop. Here’s the whole photo so that you can enjoy the full effect and bask in the glory: 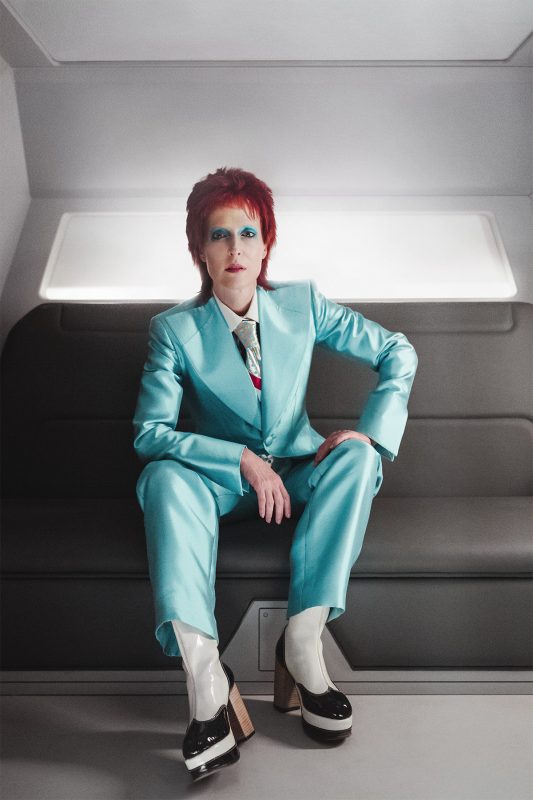 (images and clip via Starz)