The Worst Thing You’ll See Today: Pepsi Couldn’t Have Created a More Tone-Deaf Ad If We Dared Them 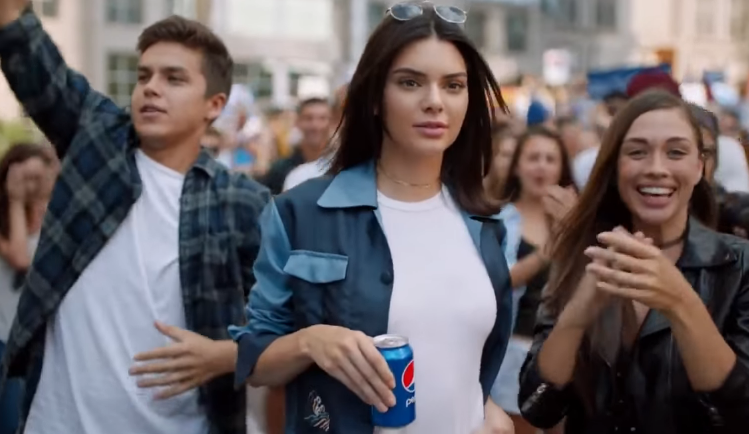 It’s been 46 years since Coca-Cola tried to unite humanity with their “I’d Like to Buy the World a Coke” campaign, and in all that time, they could never do what Pepsi has now accomplished with their latest ad. I don’t think I’ve ever seen people of all walks agree so strongly, but here we are, united as humans in our strong certainty that this is most definitely the worst ad ever created.

So proud of you @kendalljenner! Thank you @pepsi for choosing Kendall to be the face of your new campaign! #Pepsi #PepsiMoment #LiveforNow pic.twitter.com/YsAa9cBG2O

Oh my gosh, this commercial has everything. EVERYTHING.

It has general “protest” as a super fun, sellable, street fair/block party-style commodity. SO HIP AND CASUAL AND WOKE! WE KNOW WHAT THE YOUTHS WANT!

It clearly means to invoke images of actual protest, but mass-manufactured and siphoned into its least challenging possible form. (i.e. The Kendall Jenner Form.)

Imagine putting your life on the line like this to fight for justice only to have it parodied by a soda company and a Kardashian pic.twitter.com/g55s09owVf

J. Edgar Hoover takes aim from the grassy knoll. The motorcade approaches. He fires. JFK raises a #Pepsi to his lips, blocks the bullet.

Hell yeah I hope the militarized police force beats the shit out of me while enjoying a cool, refreshing Pepsi™ https://t.co/E7NgU9uTwS

Thanks, Pepsi, for finally teaching us how revolution works.

I have a Pepsi.” pic.twitter.com/NW0sddKOOI

“I’M TELLIN’ YOU I GAVE THE OFFICER A PEPSI AND HE TOOK HIS HAND OFF HIS NIGHT STICK!”

“Whoa slow down lemme get this straight…” pic.twitter.com/pM1uy66vft

It manages to sell protest as a fun cool product, but also be centered around a message, it seems, of Blue Lives Matter?

When she thinks the can of Pepsi is going to stop you from pepper spraying the nearest person of color pic.twitter.com/XMDfg8s02G

i get it now. if black lives matter protesters would’ve handed a pepsi to the cops they wouldnt of gotten tear gassed. it’s so clear now.

Overall, appropriating protest for corporate sales isn’t going to go over well. I think a lot of us could have told Pepsi that, but alas, no one ever asked.

The Kendall Jenner Pepsi fiasco is a perfect example of what happens when there’s no black people in the room when decisions are being made.

I’m sure they have our best interests at heart, though, right? Given all that wokeness?

That’s all I got.

Here’s a statement I just got from Pepsi about their Kendall Jenner joins the resistance ad (story coming shortly on @Adweek dot com): pic.twitter.com/XIKDypVpvb

But, again, at the very least, it did bring a lot of us together. You know, in our hatred of it.

Hot take: the Pepsi ad is a unifying force.

In fairness to Pepsi, their ad did bring people together.

And then, one of the very worst parts in a long parade of worst parts:

Lots of issues with the Pepsi ad but the glaring absence & erasure of black women is a huge one. Black women carry movements on their backs.

I’ve watched this @Pepsi commercial several times, and the ONLY Black woman in the commercial is catching Kendall Jenner’s blonde wig. pic.twitter.com/HJods3LdbL

@yusufyuie Peep the black woman’s face as she gets Kendall’s blonde wig tossed in her face 😭 pic.twitter.com/UHhfHhMCtM

Kendall Jenner tosses her wig to a black woman, doesn't even look at her, and goes to join a "protest"?

Oh, hey, bonus gift! Did you think this couldn’t be any worse? Well, surprise! Here’s the full-length version.