The Strange, ‘Horrible’ Tale of The Web’s First Photo 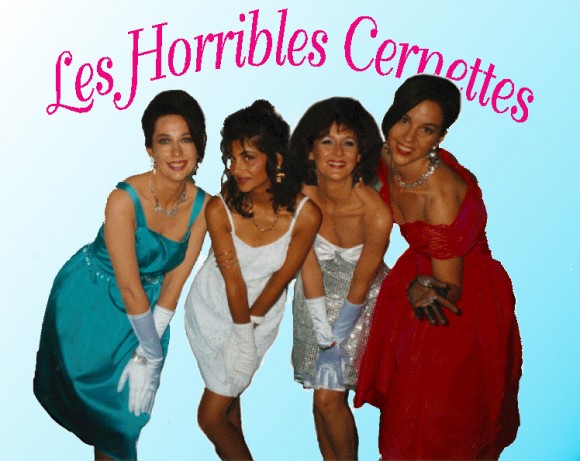 It might seem preposterous, but the first photo on the World Wide Web wasn’t a cat meme — it was an ensemble shot of Les Horribles Cernettes, a comedy band based at the CERN laboratory near Geneva. Let that sink in for a moment. Hit the jump to hear more about how the web’s very first photo anticipated poorly photoshopped Myspace and Facebook group profile pics by about 20 years!

On July 18th, 1992, Silvano de Gennaro, an IT developer at CERN who worked near Tim Berners-Lee and the other scientists who had invented the Web, snapped a photo of Les Horribles Cernettes, a comedy band he managed and composed lyrics for. They were backstage at the Hardronic Music Festival, an annual event thrown by CERN’s administrators. He had no idea how historically significant his photo would turn out to be: “When history happens, you don’t know that you’re in it.”

The Cernettes were comprised of CERN administrative assistants and significant others of scientists, and they were fairly popular for a science-y comedy band, with lyrical gems such as “you said I’d be yours 30,240,000 seconds a year / Including leap years, which means 86,400 extra every four.” So, when Lee and his fellow web-pioneers decided to include image functionality to the World Wide Web, the Internet precursor used only by physicists at the time, he asked for an image of the Cernettes. Why? As Jean-François Groff, a programmer for the Web project, put it: “Sex sells! It’s media. You put a pretty girl in the media, people will notice the media. And whatever is around the pretty girl? Sure.”

Okay, so that’s actually kind of a skeezy origin story for the first photo on the net. But, despite the sort of weird sexual politics underlying their impetus to test the Web’s image support on an image of Les Horribles Cernettes, that single photo marked a huge moment for the Internet as we know it: “In order to convince management that we should connect CERN to the Internet and not just to proprietary networks, we had to fight to convince them how useful it would be,” Groff said. “That’s why we only put serious stuff on it. So it was kind of a revolution to say, ‘Now let’s do something fun with it.” So, in a way,  this very photo of Les Horribles Cernettes birthed the same whimsy with which cat photos and duckfaces pepper our Internet today. And where would society be without the Cat Video Film Festival?

In all seriousness, it’s pretty neat that the first photo uploaded to the net was a nerdy girl band. Here’s a video of them singing Mr. Higgs, which is pretty appropriate considering CERN’s recent discovery of the Higgs-Boson particle.  In a way, CERN and Les Horribles Cernettes saw the development of the Internet as we know it — as both a place to divulge the latest information on paradigm-shifting laws of physics, and as a forum to share funny pictures and videos. Thanks, CERN!