One fundraiser with Bruce Wayne's pals and they'd never need another cent. 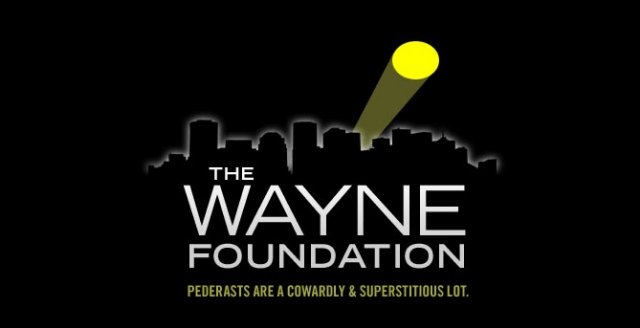 In the comics, The Wayne Foundation is a way for Bruce Wayne to help his city in ways that Batman cannot. In the real world, it’s a charity that fights the sexual exploitation and trafficking of children. We spoke to its president Jamie Walton about starting the foundation with Kevin Smith, and which superheroes she’d like to see donate.

There is an incredible two-part interview of Walton by Kevin Smith on his Sminterview podcast. It tells her life story, which as a survivor of domestic minor sexual trafficking gets pretty harrowing at parts, but thankfully ends well. It’s a lengthy listen, but more than worth than the time if you have a few hours to spare.

Walton and the Wayne Foundation are in the middle of a fundraising competition, so we thought it would be a good time to check in and talk about what the organization does, and how a name that started in a comic book is helping real people today.

Glen Tickle: You run the Wayne Foundation, which is a name a lot of people know from comics, but your organization is very real. Can you tell me what you do?

The Wayne Foundation’s vision is for a world without child slavery. We believe that all victims can be rehabilitated through a survivor-centered approach that provides education assistance, mental and physical health services, housing, legal services, and a support staff who are dedicated to assisting victims reach their full potential. It is our objective to aid them until they are capable of reentering society on their own as happy and healthy adults.

Sexual trafficking victims can be any sex, age, ethnicity, background. Our organization is survivor lead. Our goal is to provide young women in the United States who have fallen victim to commercial sexual exploitation and domestic trafficking with a means of leaving the sex industry for good. The Wayne Foundation is committed to fighting child sexual exploitation one victim at a time by providing individuals with a safe home environment that will empower them with the tools they will need to stop the cycle of abuse. It is our intent to fight CSEC within the United States through direct victim assistance, public outreach, and by directly working with those who shape the policies and statutes which impact victims and their abusers.

There’s an incredible two part interview of you by Kevin Smith about your life story, how involved was he in getting the Wayne Foundation off the ground?

It was Kevin’s idea! I just said yes, I would love to run my own charity. He started us off with a little seed money from his message board membership fees and I started the process of becoming a corporation and filing for nonprofit status. This took a year to complete. Since then, Kevin frequently raises money for TWF and mentions our cause throughout his dealings.

You’re currently involved in a fundraising competition. How does that work? Whoever gets the most money wins more money?

Yes, Crowdrise.com paired up with Under Armour for a competition that is taking place over 6 weeks. The top three prizes for the most money raised are $20k, $10k, $5k respectively. The fine print states the winning charities must have 75 unique donors (based on billing name and street address) before the end of the competition on Oct 29. I personally feel that some of the orgs may not have read the fine print of the rules, but that is a good thing for us in a sense. Additionally, there are bonus prizes each week for meeting certain criteria. This week was to raise $500 in 7 days for a possible $2k prize. (Yay, we qualified)

You’ve been tweeting out some names of donors. So far it looks like James Gordon, Dick Grayson, and Batgirl have all kicked in money. Any other heroes you hope to see kick in a few bucks?

Any Gothamites. I think it’s a cute way to encourage donors. “Hey I want to claim the Riddler, or I want to be the one to donate as Batman!”

You can find out more about The Wayne Foundation by visiting their website, or their fundraising page on Crowdrise.com. We’d like to thank Jamie Walton for taking the time to speak with us, and for all the work she’s doing.

(via The Wayne Foundation)