The Walking Dead Recap: “What Happened and What’s Going On” 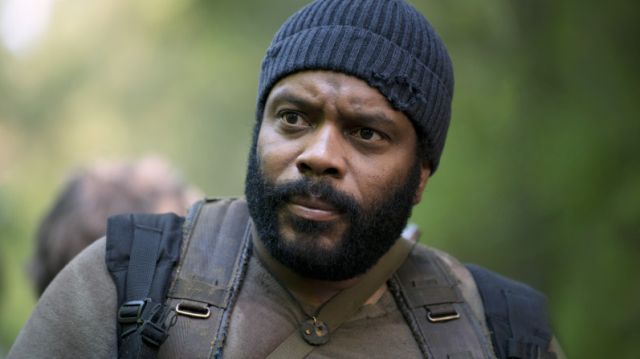 If you haven’t seen the season 5 mid-season premiere of The Walking Dead, be warned, there are absolutely spoilers ahead!

It’s been a long winter hiatus, especially given the particularly tragic way the first half of Season 5 ended. Jumping into the second half of Season 5, I was certain the worst was behind us–at least for a few episodes.

Yeah, not so much.

This episode picks back up with the group trying to find some sort of direction after the devastating loss of Beth, and Eugene’s unsurprising yet disappointing confession that his “classified” plan to save the world from the infection was nothing more than, well, an unsurprising and disappointing load of crap. Heartbroken and directionless, the group decides to accompany Noah back to his home in Virginia. Though no one is incredibly hopeful Noah’s home will be intact, Noah assures Rick and the rest of the group that his home was protected and walled in, so it will be in great shape, and could become safe haven for the rest of the group.

Hmm…a nice community that is allegedly safe because it’s walled in? You mean like Woodbury? Or the prison? Those were super successful and totally stayed safe.

Regardless of the chances, Rick decides to take Noah, Tyreese, Michonne, and Glenn on a journey to Noah’s home. When they finally reach Noah’s hometown…well…

Not only is the town overrun, but the damage to the town makes it pretty clear that the destruction happened because of a group of really bad people, not a big walker herd. I’m sure we’re going to see more of these bad guys in the future.

Whether or not Noah’s home being destroyed was expected, watching Noah realize his family and friends were officially gone was pretty brutal. Maybe we all knew the chances of Noah reuniting with his family were slim–we all know what show we’re watching, after all–however, it was kind of refreshing to follow Noah and his hopeful journey. I’d be lying if I said there wasn’t a small part of me hoping Noah’s family would be okay, and his town would happily take in Rick and the rest of the group.

Of course, this is The Walking Dead, so things certainly don’t end that happily. After seeing the destroyed town, the group splits in half, Tyreese and Noah in one group, Michonne, Glenn, and Rick in the other. Tyreese and Noah end up back at Noah’s home, where Noah discovers his mother’s corpse. As Noah is saying goodbye to his mother, Tyreese goes to investigate a noise in the other room. In the room, Tyreese finds the corpse of one of Noah’s younger siblings. As Tyreese is looking at the pictures of Noah’s younger brothers, fully accepting the tragedy of the death of a young boy, a family, and countless others, Noah’s other brother–now a walker–bites Tyreese.

Because of course it does.

Meanwhile, Glenn, Rick, and Michonne are scouring the town, trying to find supplies and working through the events at Dawn’s hospital. The more they talk about the events and their complete lack of remorse or hesitation in killing Dawn, Michonne starts to realize that perhaps they have been on the road for too long. Perhaps too much time has passed between that moment and the time when they had a home and were actively building a life at the prison. Maybe Eugene was full of it when he said he had a cure, but he might have been on to something by trying to go to D.C. So, full of hope of some sort of solution in D.C., they decide to go to the nation’s capitol. After all, the group is already in Virginia, so it would be a short journey to D.C., and it seems to be worth it to try to build a life.

Meanwhile, Tyreese is trying to fight the virus coursing through his body–and seriously losing. He begins hallucinating, seeing the Governor, Beth, Bob, Mika, Martin and Lizzie around him, helping him work through that idea of continuing to pay the price for his actions, continuing to pay the hefty cost of surviving in this world, and simply letting himself forgive himself and let go.

Let me be honest, I loved the way the writers portrayed Tyreese’s fever dream. It was incredibly creative, and pretty powerful. It was great to watch him work out this debt that he felt he had to pay for the wrongs he had done, the debt he had to pay to be a citizen of the world, and the hefty price one pays by simply staying alive in this new world. However poetic it was, Ty’s fever dream was also incredibly cruel. Just as I was resigning myself to Tyreese’s death, he gets a surge of determination, starts screaming that he won’t give up, and we see Rick’s group hack off Ty’s infected arm.

Chopping off an infected limb worked for Hershel, so it can work for Ty, right? Right?!?

Yeah, not so much. The virus aside, Tyrese had lost an astounding amount of blood from the original bite and then, of course, the loss of his arm. After the group works incredibly hard to get Ty from the city into their car, things start getting bad pretty darn fast for poor Tyreese. Suddenly the environment in the car begins to change. There is a particularly bright light shining on Tyreese (DON’T GO TO THE LIGHT, TY!!!), and the others in the car turn from Glenn, Rick, and Michonne into Bob, Mika, Lizzie, and Beth, offering encouragement to Tyrese…

…and then he dies.

I’ve got to be honest. Ty’s death felt completely pointless to me. While I really loved the fever dream, and I loved watching him work out his feelings about the events that had taken place since the infection, his death just seemed…stupid and pointless.

But I kind of wonder if that wasn’t the point. The line that kept getting repeated throughout the episode was, “It went the way it had to. The way it was always going to,” and to me, that sort of speaks to the randomness and sometimes pointless ways people leave us–especially in this post-apocalyptic world. In a world that seems so frustratingly random and pointlessly cruel, what sort of hope is there? What sort of point is there to trying to build a life? The pointless death of Tyreese paired with Michonne’s speech in this episode made me think the group is going to really have to start figuring out what the point is behind surviving in this new world.

Maybe life after the walkers took over everything is mostly pointless and cruel, but maybe the point of surviving is to fight for one more day with a chance of something better and more stable? Maybe the writers were trying to use Tyreese’s death to illustrate that fact for the survivors.

Maybe not. Maybe I’m trying to make sense out of a death of a character that I really, truly loved, and don’t think deserved to be killed off in such an unceremonious fashion. I’d be remiss if I didn’t say I’m getting a little bummed out by how trigger-happy this show can be, and how predictable deaths can often be.

Tyreese is really full of wisdom today. I *really* hope that doesn’t mean he’s about to die… #TheWalkingDead

Tyreese was such a strong, truly good character in a show which so often can get very dark. He was one of the remaining characters still trying to truly wrestle with what it meant to be human–not just a survivor–in this new world, and what it meant to be a good person. He brought such depth to the show, and some great moral questions for fans to unwrap. I understand that characters die–and die frequently–on this show, but I wish Tyreese’s death didn’t feel so pointless.

The group found such light in characters like Tyreese and Beth, and we’ve lost them both now. I can’t imagine that this signals good things ahead for the survivors. Of course, if you caught Talking Dead, apparently things are only going to get worse for our people, so Ty’s death may be the first of many tragedies in the second half of Season 5. We will just have to see what’s to come. For now, rest in peace, Tyreese. We’ll miss you.