What did we ever do to The Walking Dead to deserve this? 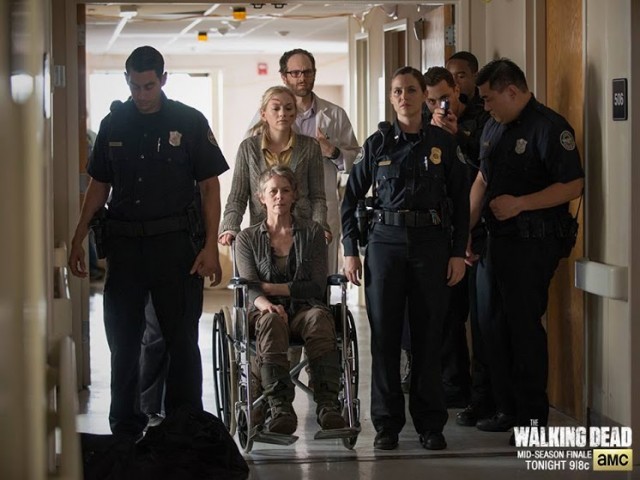 I say this every week, but oh my word, those of you who aren’t caught up on The Walking Dead, heed my warning today especially: Spoiler. Alert.

This week brought us the mid-season finale of The Walking Dead, and honestly, I’m kind of just sitting here shell shocked over the entire episode. The last time the show had me this torn up was the “look at the flowers” incident. So let’s try to process the episode together.

Last week’s episode set us up for a big showdown between Rick’s group and the hospital. Rick had captured three of Dawn’s cops, and the plan was to offer an exchange, Dawn’s officers for Beth and Carol. The episode ended with Officer Bob knocking out Sasha and escaping. This week kicked off with Bob running away, Rick close at his heels. After Rick tells Bob to stop running and Bob refuses, Rick rams a car into Bob–possibly breaking Bob’s spine–and then shoots Bob in the head. I gotta be honest. Rick acting this mercilessly and this brutally, offering Bob one chance to surrender and then paralyzing and killing him? That kind of reminds me of someone… 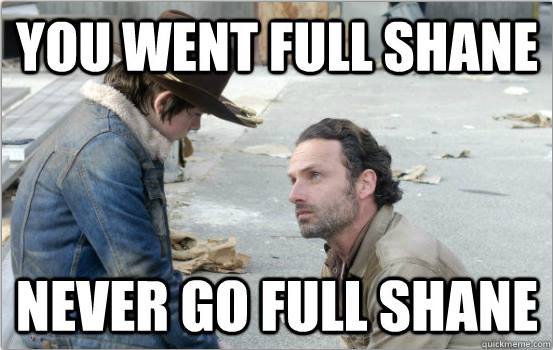 Though, in Rick’s defense, you kind of have to “go full Shane” to survive in this world. After losing Lori, fighting the Governor, Terminus, and Gareth’s hunters, I think Rick is done with trying to preserve his mercy and his humanity. If Shane was with the group now, I think he and Rick would see eye-to-eye far more frequently than they did on the farm. I’m guessing we’ll unpack more of Rick’s brutality in second half of the season.

Checking in with Father Gabriel, we find him limping around the school where the “Bob-B-Q” happened. He spots Bob’s leg, gets spotted by a walker herd, and he limps back to the church…bringing the herd with him.

Carl and Michonne (with Judith on her back) are able to escape the church with Gabriel and lock the walkers inside the church. Just as the walkers begin to break free from the church, Abraham’s group rolls up in the firetruck, blocking the walkers in. Reunited with the DC group, Michonne lets Maggie know that Rick is with a group to rescue Beth, and they all head over to the hospital to back him up.

Back at the hospital, Beth and Dawn have some moments where the writers of the show try to get us to empathize with Officer Dawn. Dawn lets Beth know that she is aware Beth killed the officer who raped Joan, and that Dawn was all too happy to cover for Beth. Then when the two are confronted by another of Dawn’s creeper officers who overheard the entire exchange, the two work together to beat the snot out of him followed by Beth pushing him down an elevator shaft. It was all some nice bonding between the two, but in my mind, any attempt of Dawn’s to be “human” just seems suspicious. But I digress…

Rick confronts officers from Dawn’s hospital, and sets up the “prisoner exchange”. Everything goes beautifully, Carol and Beth are happily exchanged with Dawn’s two officers…and then Dawn asks for Noah.

Obviously, Rick and the group aren’t okay with this. Noah was never part of the deal, and Noah clearly does not want to be at the hospital. However, once he realizes things are about to get violent, Noah turns himself over to Dawn, who responds with, “I knew you’d come back.” Beth goes up to Noah, hugs him, and goes up to Dawn, stabbing her with a pair of scissors. Dawn then shoots Beth right through the head–it’s unclear if it was an accident, or if Dawn meant to shoot Beth. Either way, Daryl, heartbroken and furious, shoots and kills Dawn. Then, we get the return of the worst thing on The Walking Dead: Daryl tears.

Before I talk about Beth, I should say that the episode ends with another quick check-in with Morgan. He finds Father Gabriel’s church and the map Abraham gave Rick. He obviously recognizes Rick’s name on the map, and the episode ends. We don’t know what he plans to do next, and we also don’t know what the deal is with those x marks on the trees. That will all unfold in the next half of the season, I’m sure.

Let’s move back to Beth. I knew someone was going to die this episode. Chris Hardwick announcing a “surprise guest” on Talking Dead only ever really signals a big death on the show. Calling the episode “Coda”, which is a musical term which means the ending of a piece of music made me highly suspicious that the show’s resident songbird, Beth, would be the one who died. Still, I hoped I was wrong, and I’m still so incredibly sad Beth is gone.

I know some of the fandom really hated Beth, but her story arc was such an interesting one to me. Sure, she was quite the liability back at the farm when she was suicidal, but you can’t blame her for feeling like a life in the apocalypse was pointless. And sure, she didn’t have a great deal of emotions while she was at the prison, but again, you can’t blame her for doing what she has to in order to survive in this new world. However, she became one of my favorites when she and Daryl escaped together. We got to see her as a real person, someone who was trying her best to understand this new world, someone who cared deeply for others, who had suffered real loss, but someone who was ultimately strong and a survivor. Sure, she wasn’t perfect, and she was literally and figuratively just a kid when all of this started, but she had grown into such an awesome character.

On Talking Dead, they mentioned over and over how Beth represented hope, light, and innocence to the group and Daryl specifically. I think that is absolutely true. After he got to know her better, I think Beth really offered some hope and light into Daryl’s life.

The show will certainly be a bit darker without her there. Rest in peace, Beth. 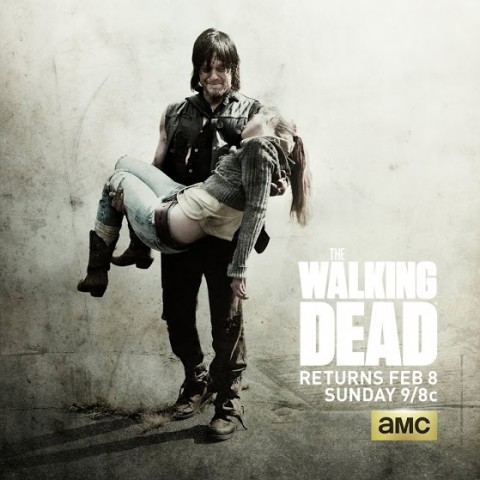 That was a heavy episode, and a heavy recap. So here’s a Rick Grimes Dad Joke Meme to cheer you up. See you guys when the show returns in February!