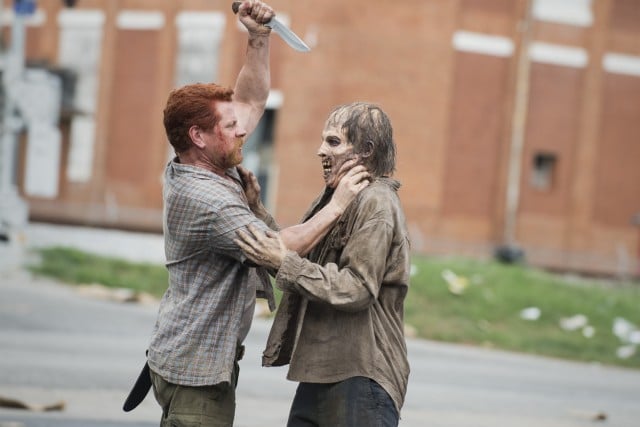 This season of The Walking Dead has been moving at a pretty frenetic pace, and this week’s episode, “Self Help”, slowed things down a bit with a more character-focused episode. If you’re not caught up on The Walking Dead, this is your official spoiler alert.

“Self Help” focused solely on Abraham’s group as they began their journey towards Washington D.C., and I’ll be honest, this was probably my least favorite episode of this season. Though, to be fair, after last week’s episode, I don’t think I would have been happy with any episode that didn’t continue the Beth, Carol, and Daryl story. Last week’s episode ended with the ENORMOUS cliffhanger of Carol being wheeled into Beth’s hospital, and all I could think during Sunday’s episode was, “Wait though, what’s going on with Carol?”

Regardless, this episode did still bring us some really important back story to Abraham, and Eugene dropped a giant bomb on everyone at the end of the episode. Let’s talk about Abraham first.

Abraham has been quite monomaniacal about getting Eugene to Washington D.C. When he was still a part of Rick’s group, Abraham was kind of horrible when Rick asked Abraham to help fight Gareth’s group. Sure, he left a sweet apology note to Rick after the fact, but it still left a bad taste in my mouth—Abraham would put getting Eugene to D.C. before literally anyone. Car accident? Walker herd? Car trouble? Low supplies? Abraham doesn’t care. He’s on a mission.

Throughout the entire episode, we’re given glimpses into Abraham’s past, which really explain his complete devotion to his “Get Eugene to D.C.” mission. In the flashback, we see him beat the snot out of several guys in a grocery store, right in front of his horrified wife and kids. 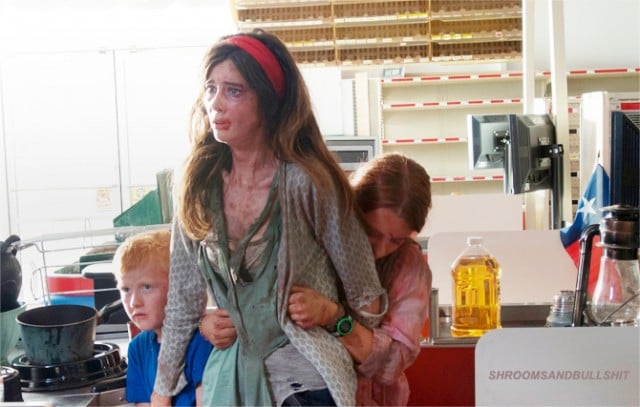 Though we’re not given the context of the fight, I’m guessing the fight began as Abraham attempting to protect his family, and then promptly switching gears into Abraham entering full-on kill mode, wielding a soup can like the Mjolnir and smashing the crap out of everyone in the grocery store.

The next morning, Abraham wakes up to find his wife and kids gone, and a note that says “Don’t come looking for us.” Of course Abraham does go looking for them, and because this is The Walking Dead and not a show about happy things, Abraham finds the dead and utterly destroyed bodies of his entire family. Understandably, Abraham is completely broken by this grisly discovery. Full of despair, he goes to kill himself, and is interrupted by the cries for help from a man off in the distance being chased by walkers. Abraham kills the walkers, and turns to leave the man—Eugene—behind. Eugene stops Abraham by uttering six words that change everything.

I’ll be honest, I was skeptical of ol’ Eugene from day one. Maybe it was the, as Eugene calls it, Tenessee Tophat, maybe it was Eugene’s inability to fight walkers, or maybe it was the fact that no one had any concrete information on Eugene’s master plan to save the human race. I’m sorry, but if I’m going to risk my life for you, I’m gonna need a better grasp on your capabilities to end this devastating plague. Telling me your plans are classified just wouldn’t cut it. From our first introduction of Eugene, I was highly suspicious of this super-secret plan to solve the zombie plague.

I know I’m not alone here in my lack of trust of Eugene. There was a clear disturbance in the force at the end of this week’s episode, as millions of voices in the Walking Dead fandom suddenly cried out, “I KNEW IT! I FREAKING CALLED IT!” The reason for this disturbance was, of course, after months of theories on Eugene’s actual scientific aptitude, Eugene came clean about his scientific, walker-ending abilities.

Understandably, this confession destroys Abraham. Saving Eugene stopped Abraham from shooting himself. Getting him to D.C. gave Abraham a renewed sense of purpose after he feeling like he not only failed his family, but drove them face-first into a danger that would ultimately claim their lives. I think it also gave Abraham a way to try to make amends for the wrong he felt he had done. Abraham’s monomania of getting Eugene to D.C. suddenly made sense. Of course he wouldn’t put anything in front of getting Eugene to D.C. because the only reason Abraham was still breathing was to ensure Eugene’s safe arrival in the Capitol. Losing his sole reason for living was a pretty big blow for Abraham.

Now that Abraham knows his entire life mission is a lie, it will be really interesting to see how he moves forward from here. Will he find a new sense of purpose, or will he return to his original plan of suicide? If he decides to live, will he kick Eugene out of the group? Will he keep pushing forward to D.C. or will they return to Rick’s group?

Next week’s episode will focus on Carol and Daryl—hooray!!!—so we probably won’t get our answers on Abraham’s next moves for at least another two weeks. Worse than that, there are only three episodes left before the mid-season hiatus, so the next few episodes will probably only bring more questions than answers.

What do you think Abraham’s next move will be? Do you want to see Abraham’s group rejoin Rick’s? Were you suspicious of Eugene, or did you think he really had a cure? Let me know in the comments!