Did you watch The Walking Dead last night instead of the Oscars? So did Geekosystem’s Victoria. Immerse yourself in her sweet, sweet zombie recap.

Last time on The Walking Dead: Michonne and Carl bonded about dead babies they know. Glenn and Tara met a bunch of weirdos on the road, and now they all have to play babysitter to an incredibly stupid scientist. Everyone else is scattered all over the place.

It’s nighttime, and Beth and Daryl are running through the forest being chased by walkers. They find an abandoned car and jump into the trunk together, leaving it open a crack so Daryl can stick his crossbow out just in case. Oh! And also now it’s thundering. This is basically like the beginning to The Emperor’s New Groove, but about a million times worse. They’re both still alive, though, so at least there’s a bright side.

After grabbing a bunch of odds and ends from the car, they make for the forest again, where Daryl attempts to kill them a squirrel to eat like the hillbilly stereotype he is. It doesn’t work out so well, and he breaks an arrow in the process. He does manage to kill a snake instead, and the two eat it over a fire that Beth makes with the car mirror they’ve scavenged.

“I need a drink,” Beth says. She means alcohol, because apparently she’s never tried it. Girl, I know you are lying: nobody who’s never had a drink before ever has that powerful a desire for one, even in the middle of a zombie apocalypse. Daryl doesn’t respond, so she decides to wander off for no discernible reason. Then, a bunch of walkers come after her because of course they do, and she does a pretty successful job of leading them away before Daryl finds her and drags her back to their “suck-ass camp.”

Beth, realizing the foolishness of her actions and the overwhelmingly negative effect that her grief must be having on her thought process, calmly and rationally respects Daryl’s judgment and willingly returns to camp. Haha, just kidding! She flips him off before going back into the woods for her elusive drink, because everyone knows that booze grows on trees. That’s why so many alcoholics are mountaineers, right? 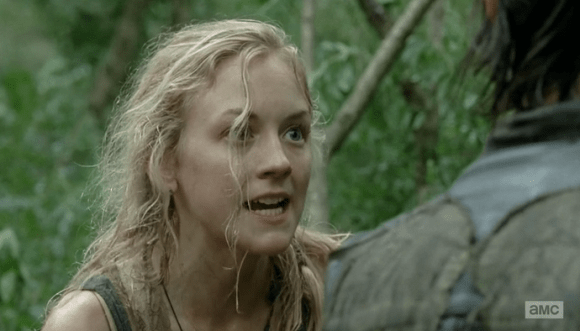